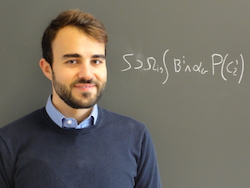 We propose a systematic approach to deriving symmetry generators of Quantum Field Theories in holography. Central to this are the Gauss law constraints in the Hamiltonian quantization of Symmetry Topological Field Theories (SymTFTs), which are obtained from supergravity. In turn we realize the symmetry generators from world-volume theories of D-branes in holography. We will also focus on non-invertible symmetries, which have emerged in the past year as a new type of symmetry in d≥ 4 QFTs. We exemplify our proposal in the holographic confinement setup, dual to 4d N=1 SU(M) or PSU(M) Super-Yang Mills (SYM). In the brane-picture, the fusion of non-invertible symmetries naturally arises from the Myers effect on D-branes. In turn, their action on line defects is modeled by the Hanany-Witten effect. For SU and PSU SYM, we also identify the infra-red (IR) 4d field theory rom the dual gravity description, which describe the domain-walls and confining/deconfining behaviour in the IR.
Host: Murat Kologlu (murat.kologlu@yale.edu)