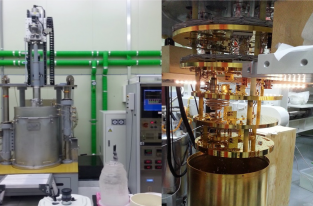 We have performed some pioneering experiments for dark matter search and double beta decay experiments at Yangyang Laboratory (Y2L) in South Korea for last 15 years. Since year of 2013, a new research center in the Institute for Basic Science (IBS), Center for Underground Physics (CUP), is approved by the government. Due to the limited space in Y2L, we are constructing a new underground laboratory at 1100 meter depth with a space of more than 2000 square meters by the end of 2019.
CUP has two main experimental programs; (1) Identification of dark matter and (2) Neutrinoless double beta decay search. Experimentalists at Yale University and CUP are conducting a 100kg-scale low background NaI(Tl) crystal experiment (COSINE-100) which will be discussed extensively in this collaboration meeting. AMoRE (Advanced Mo-based Rare phenomena Experiment) is a state-of-art experiment based on low temperature MMC sensor and ultra pure molybdate crystals containing highly enriched isotopes. The sensitivity reach 10^27 years of half-life and down to 15-30 meV of neutrino mass by running 5 years with 200 kg of molybdate crystals. In addition to the two main programs, a short baseline neutrino experiment (NEOS) has been conducted and the future perspectives are discussed. The general concept and goal of CUP will be briefly described.