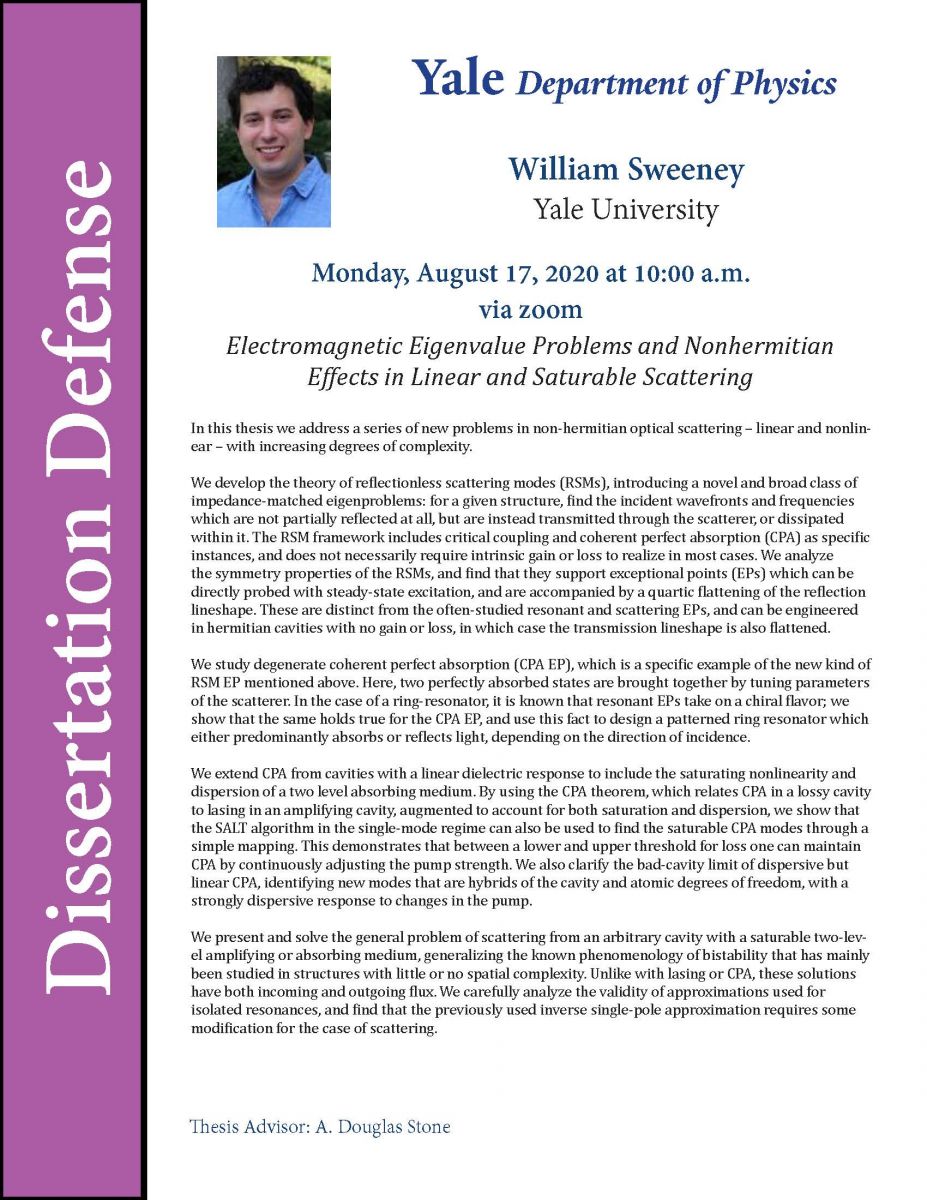 In this thesis we address a series of new problems in non-hermitian optical scattering – linear and nonlinear – with increasing degrees of complexity.
We develop the theory of reflectionless scattering modes (RSMs), introducing a novel and broad class of impedance-matched eigenproblems: for a given structure, find the incident wavefronts and frequencies which are not partially reflected at all, but are instead transmitted through the scatterer, or dissipated within it. The RSM framework includes critical coupling and coherent perfect absorption (CPA) as specific instances, and does not necessarily require intrinsic gain or loss to realize in most cases. We analyze the symmetry properties of the RSMs, and find that they support exceptional points (EPs) which can be directly probed with steady-state excitation, and are accompanied by a quartic flattening of the reflection lineshape. These are distinct from the often-studied resonant and scattering EPs, and can be engineered in hermitian cavities with no gain or loss, in which case the transmission lineshape is also flattened.
We study degenerate coherent perfect absorption (CPA EP), which is a specific example of the new kind of RSM EP mentioned above. Here, two perfectly absorbed states are brought together by tuning parameters of the scatterer. In the case of a ring-resonator, it is known that resonant EPs take on a chiral flavor; we show that the same holds true for the CPA EP, and use this fact to design a patterned ring resonator which either predominantly absorbs or reflects light, depending on the direction of incidence.
We extend CPA from cavities with a linear dielectric response to include the saturating nonlinearity and dispersion of a two level absorbing medium. By using the CPA theorem, which relates CPA in a lossy cavity to lasing in an amplifying cavity, augmented to account for both saturation and dispersion, we show that the SALT algorithm in the single-mode regime can also be used to find the saturable CPA modes through a simple mapping. This demonstrates that between a lower and upper threshold for loss one can maintain CPA by continuously adjusting the pump strength. We also clarify the bad-cavity limit of dispersive but linear CPA, identifying new modes that are hybrids of the cavity and atomic degrees of freedom, with a strongly dispersive response to changes in the pump.
We present and solve the general problem of scattering from an arbitrary cavity with a saturable two-level amplifying or absorbing medium, generalizing the known phenomenology of bistability that has mainly been studied in structures with little or no spatial complexity. Unlike with lasing or CPA, these solutions have both incoming and outgoing flux. We carefully analyze the validity of approximations used for isolated resonances, and find that the previously used inverse single-pole approximation requires some modification for the case of scattering.
Thesis Advisor: A. Douglas Stone