Home » Calendar » Society of Physics Students Talk: Kaustav Mitra, Yale Department of Astronomy, "How to weigh galaxies and why do we need to?"

Society of Physics Students Talk: Kaustav Mitra, Yale Department of Astronomy, “How to weigh galaxies and why do we need to?” 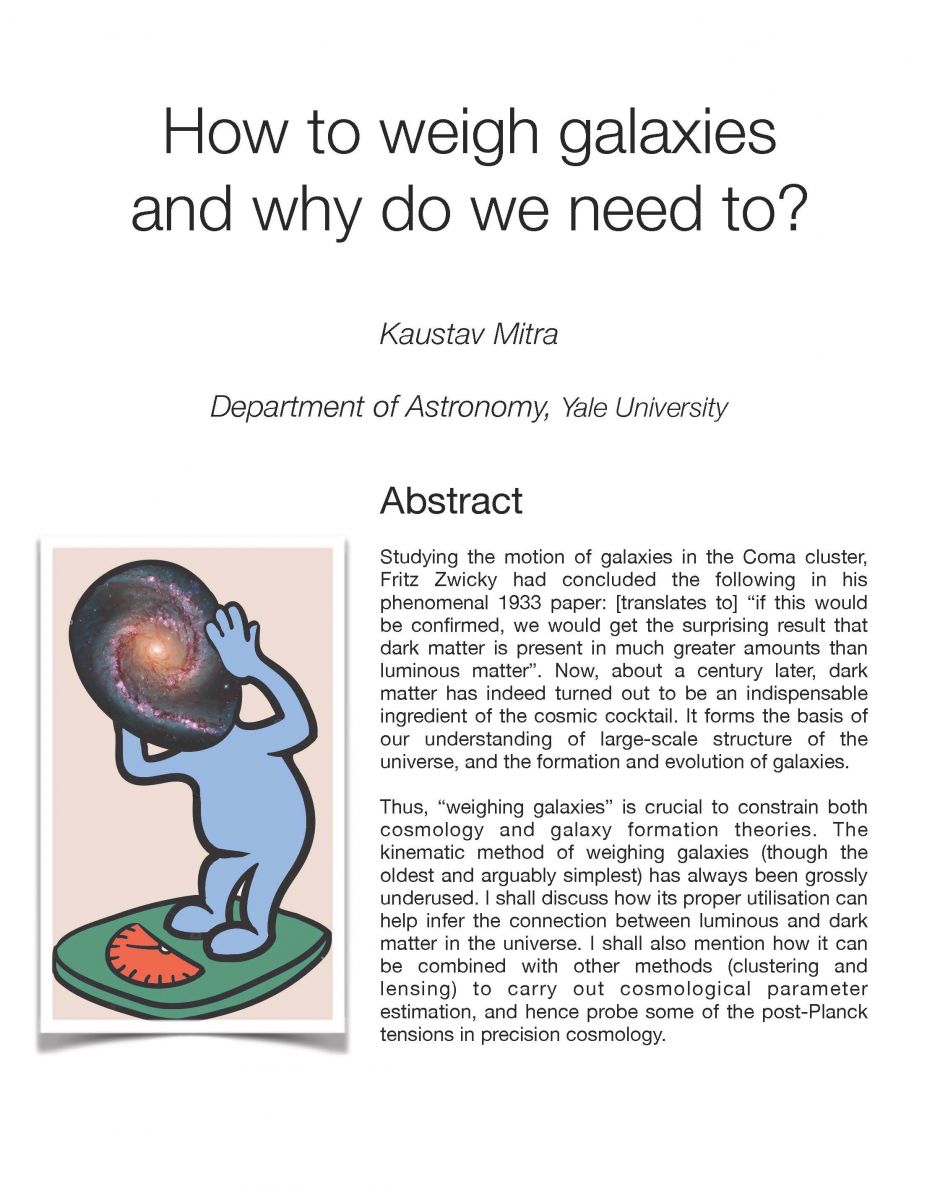 https://yale.zoom.us/j/96118396029
Meeting ID: 961 1839 6029
How do we weigh galaxies? Third-year graduate student Kaustav Mitra from Yale Department of Astronomy will be giving an informal research talk on the kinetic method of weighing galaxies, its implication on the study of dark matter, and its crucial role in shaping cosmology/galaxy formation theory. A part of the Informal Research Talk Series organized by the Yale SPS, the virtual event is primarily aimed at undergraduate students interested in research but everyone is welcome! During the Q&A session after the talk, you will also have the opportunity to ask Kaustav any questions related to doing research and pursuing graduate studies in astronomy.
Abstract:
Studying the motion of galaxies in the Coma cluster, Fritz Zwicky had concluded the following in his phenomenal 1933 paper: [translates to] “if this would be confirmed, we would get the surprising result that dark matter is present in much greater amounts than luminous matter”. Now, about a century later, dark matter has indeed turned out to be an indispensable ingredient of the cosmic cocktail. It forms the basis of our understanding of large-scale structure of the universe, and the formation and evolution of galaxies.
Thus, “weighing galaxies” is crucial to constrain both cosmology and galaxy formation theories. The kinematic method of weighing galaxies (though the oldest and arguably simplest) has always been grossly underused. I shall discuss how its proper utilization can help infer the connection between luminous and dark matter in the universe. I shall also mention how it can be combined with other methods (clustering and lensing) to carry out cosmological parameter estimation, and hence probe some of the post-Planck tensions in precision cosmology.