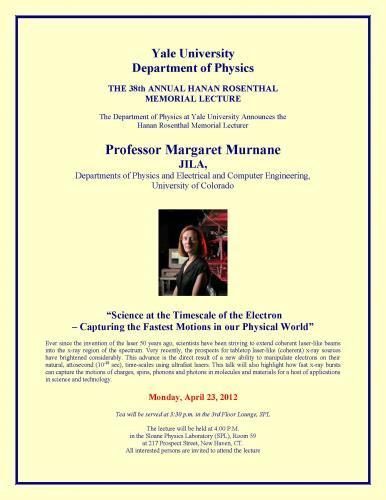 The Yale Physics 38th Annual Hanan Rosenthal Memorial Lecture was given on April 23, 2012 by Professor Margaret Murnane, JILA, Departments of Physics and Electrical and Computer Engineering, University of Colorado.

Monday, April 23, 2012 - Science at the Timescale of the Electron – Capturing the Fastest Motions in our Physical World

Ever since the invention of the laser 50 years ago, scientists have been striving to extend coherent laser-like beams into the x-ray region of the spectrum. Very recently, the prospects for tabletop laser-like (coherent) x-ray sources have brightened considerably. This advance is the direct result of a new ability to manipulate electrons on their natural, attosecond (10-18 sec), time-scales using ultrafast lasers. This talk will also highlight how fast x-ray bursts can capture the motions of charges, spins, phonons and photons in molecules and materials for a host of applications in science and technology.

The Hanan Rosenthal Memorial Lecture was established in honor of physicist Hanan Rosenthal, a brilliant graduate student at Columbia University and instructor at Yale. This annual lecture in atomic physics, Rosenthal’s field, is given by a distinguished leader in the field. Originally, the lecture series alternated between Columbia and Yale, which were both significant in Hanan Rosenthal’s career; in recent years, the lecture has been held only at Yale University.