Home » News » Alexandru Bogdan Georgescu has been named the recipient of the 2016 D. Allan Bromley Graduate Fellowship in Physics

Alexandru Bogdan Georgescu has been named the recipient of the 2016 D. Allan Bromley Graduate Fellowship in Physics 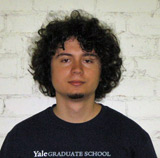 Alexandru Bogdan Georgescu has been named the recipient of the 2016 D. Allan Bromley Graduate Fellowship in Physics.

Alexandru Georgescu’s theoretical thesis research in condensed matter physics (supervised by Prof. Sohrab Ismail-Beigi) involves first principles studies of the electronic structure of interfaces involving strongly correlated transition metal oxides.  He has worked on both modeling actual interfaces fabricated and characterized by his experimental colleagues in CRISP, the NSF MRSEC at Yale, as well as creating new methodologies for electronic structure calculations.  Recently, he has been working on a promising approach to permit rapid but approximate solution of extended Hubbard models, with many potential applications.

Alexandru has broad interests beyond physics, focusing on the areas of science education, and community service.  Alexandru started out as a TA in Math and Physics courses while still an undergraduate at Columbia, and he took on a large number of teaching and tutoring assignments at Yale.  He was active in many outreach activities as part of his CRISP membership, including contributions to the S.C.H.O.L.A.R. lectures, and as the graduate student liason for CRISP outreach (2014-15).  In addition to his CRISP efforts, Alexandru sought out even more volunteering opportunities on his own.  For example, he mentored two Fair Haven 5th graders as they won the school science fair with their “Do Ants prefer salty or sweet?” project.  Alexandru’s dedication and commitment to teaching and outreach in the community is clearly one of his passions, and he is making New Haven a better place through his efforts.

The selection committee faced another tough choice this year, with no lack of highly-qualified applicants. Dr. Bromley would be thrilled to see the many ways that Yale Physics graduate students are making a difference at Yale, and beyond.

The Fellowship is awarded annually to graduate students in Physics who have advanced to candidacy in the Ph.D. program, particularly those “who exhibit a broader interest than just physics, including, but not limited to, science and public policy, engineering, and applied science.” Candidates are nominated by the Physics faculty and selected by the D. Allan Bromley Professor of Physics (currently Rick Casten) and the Director of Graduate Studies (currently Sean Barrett). The indenture
goes on to say, “In this way, the recipients will reflect and celebrate Dr. Bromley’s distinguished and honorable persona in the exceptional scope, standing, talent, and character of his distinguished personal, public, and academic life.”

Please join us in congratulating Alex.