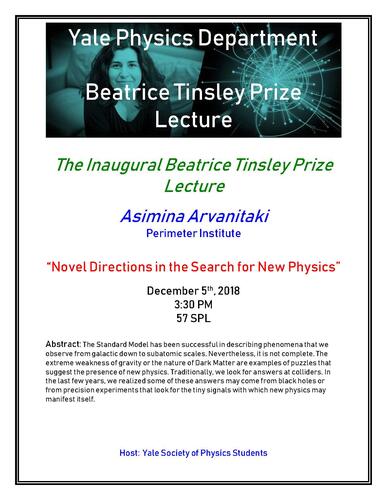 The inaugural Yale Physics Beatrice Tinsley Prize Lecture, hosted by the Yale Society of Physics Students, Women in Physics, and selected Astronomy majors, will be given on, December 5th by Asimina Arvanitaki of the Perimeter Institute.

Wednesday, December 5, 2018 - Novel Directions in the Search for New Physics

The Standard Model has been successful in describing phenomena that we observe from galactic down to subatomic scales. Nevertheless, it is not complete. The extreme weakness of gravity or the nature of Dark Matter are examples of puzzles that suggest the presence of new physics. Traditionally, we look for answers at colliders. In the last few years, we realized some of these answers may come from black holes or from precision experiments that look for the tiny signals with which new physics may manifest itself.

The Beatrice Tinsley Prize Lecture is given each year by a distinguished physicist in honor of Beatrice Muriel Hill Tinsley, the first female professor of astronomy at Yale, where she worked from 1974 until her death in 1981. Her work on disk galaxies has proven foundational in the decades following her passing. In 2016, the Yale Society of Physics Students inaugurated the Beatrice Tinsley Prize Lecture, which saw the invitation of Asimina Arvanitaki. This prize was started to honor Tinsley’s myriad contributions and to encourage collaboration and contact between distinguished physicists and the Yale undergraduate physics community. The speaker is jointly invited and hosted by the Society of Physics Students, Women in Physics, and undergraduate students from Astronomy.