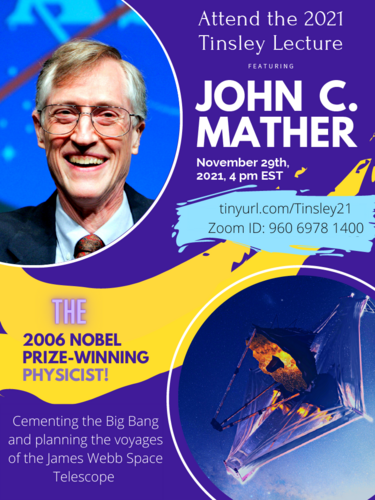 The Yale Physics 2021 Beatrice Tinsley Prize Lecture, hosted by the Yale Society of Physics Students, Women in Physics, and Astronomy majors, will be given on November 29th by John C. Mather from NASA.

The long-awaited James Webb Space Telescope is planned for launch on Dec. 18, 2021. With its 6.5 m deployable primary mirror, and cameras and spectrometers covering 0.6 to 28 µm, it promises extraordinary improvements in observing capabilities. Webb will be able to observe the first objects that formed after the Big Bang, the growth of galaxies, the formation of stars and planetary systems, individual exoplanets through coronography and transit spectroscopy, and all objects in the Solar System from Mars on out. It could observe a 1 cm2 bumblebee at the distance of the Moon, in reflected sunlight and thermal emission. I will review the observatory capabilities and planned observing program, and illustrate the history of the concept from 1988 to now. The Webb is a joint project of NASA with the European and Canadian space agencies. I will also note the possibilities for the next generation of ground-based telescopes with adaptive optics, including orbiting laser guide stars and an orbiting starshade for direct observation of exoplanets.

The Beatrice Tinsley Prize Lecture is given each year by a distinguished physicist in honor of Beatrice Muriel Hill Tinsley, the first female professor of astronomy at Yale, where she worked from 1974 until her death in 1981. Her work on disk galaxies has proven foundational in the decades following her passing. In 2016, the Yale Society of Physics Students inaugurated the Beatrice Tinsley Prize Lecture, which saw the invitation of Asimina Arvanitaki. This prize was started to honor Tinsley’s myriad contributions and to encourage collaboration and contact between distinguished physicists and the Yale undergraduate physics community. The speaker is jointly invited and hosted by the Society of Physics Students, Women in Physics, and undergraduate students from Astronomy.