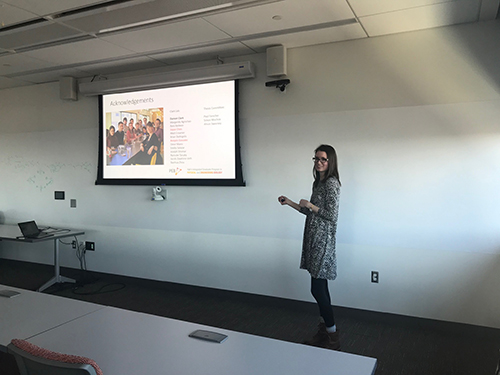 Matulis explained “As sighted animals travel through the world, they encounter visual environments that vary in different ways. One property of visual scenes is contrast, or the range of luminances in the scene relative to the mean. My research investigated how different visual neurons adapt, or alter their stimulus-response relationship, in response to changes in contrast over time. This work was performed using the fruit fly Drosophila as a model organism, which allowed us to investigate contrast adaptation throughout a well-established visual circuit. We performed imaging experiments to record from 16 different cell types in the early visual system in order to investigate their contrast response properties. We found that there is strong contrast adaptation in neurons of several different cell types; we ruled out several possible mechanisms underlying this adaptation; and we found that contrast adaptation in early visual neurons is beneficial for motion processing in downstream neurons. ”

Matulis will join Mathworks in the Engineering Development Group.

Thesis Abstract: In visual systems, neurons adapt both to the mean light level and to the range of light levels, or the contrast. Contrast adaptation has been studied extensively, but it remains unclear how it is distributed among neurons in connected circuits, and how early adaptation affects subsequent computations. In this study, we investigated temporal contrast adaptation in neurons across Drosophila’s visual motion circuitry. Several ON-pathway neurons showed strong adaptation to changes in contrast over time. One of these neurons, Mi1, showed almost complete adaptation on fast timescales, and experiments ruled out several potential mechanisms for its adaptive properties. When contrast adaptation reduced the gain in ON-pathway cells, it was accompanied by decreased motion responses in downstream direction-selective cells. Simulations show that contrast adaptation can substantially improve motion estimates in natural scenes. The benefits are larger for ON-pathway adaptation, which helps explain the heterogeneous distribution of contrast adaptation in these circuits.