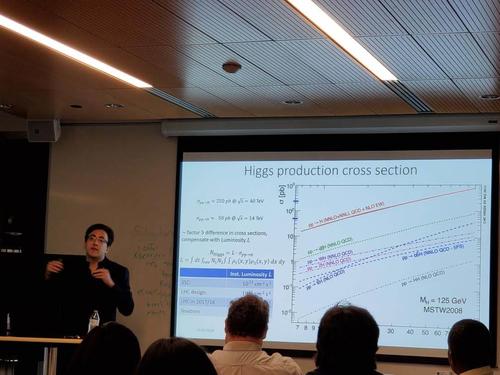 In November, Weber will become a Research Associate in Physics at Brookhaven National Laboratory.

Thesis abstract: In 2012 the ATLAS and CMS experiments both reported the discovery of a new particle in the remnants of high-energy proton-proton collisions. The particles properties were consistent with the ones of the Standard Model Higgs boson. Its discovery, 58 years after its postulation, marked the completion of the Standard Model of Particle Physics.

Subsequent data taking at both experiments continued to record Higgs boson decays. With this increased dataset, we are now able to probe for new physics by studying the Higgs boson itself in ever greater detail. Specifically, the unique properties of the Higgs boson, it being chargeless, having sping-0, and coupling to mass, allow us now to probe previously inaccessible sectors of particle physics. That is, potential new particles whose interaction with Standard Model particles is otherwise forbidden or suppressed by lack of standard model charge or other symmetry considerations.

In this presentation I will detail the search for a beyond Standard Model gauge boson, that is not directly charged under the standard model. Specifically, the search for ‘dark’ Z-boson via the exotic Higgs boson decay  H→ZZd→4l. I will give an overview of the machinery used to produce Higgs boson as well as the detector used to measure its decay products, the LHC and the ATLAS detector. In addition to that I will present limits on the cross section  H→ZZd→4l  and detail the statistical methods used in inferring the cross section limits from the recorded data.