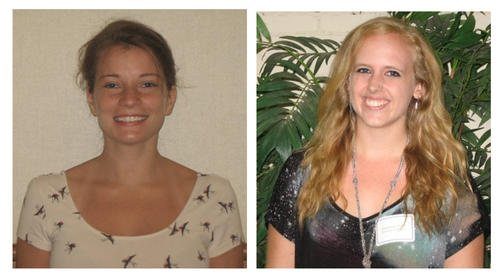 It is a pleasure to announce that Danielle Norcini and Savannah Thais have been named co-recipients of the 2018 D. Allan Bromley Graduate Fellowship in Physics.

Danielle Norcini is a 5th year graduate student in the Wright Laboratory neutrino group of the Physics Department whose thesis research focuses on the study of reactor neutrinos and neutrino oscillation with PROSPECT (the Precision Oscillation and Spectrum Experiment). Her thesis will include the first search for eV-scale sterile neutrinos and precision measurement of the 235U anti-neutrino spectrum with PROSPECT. She received a Leigh Page Prize for entering graduate students in 2013. Professor Karsten Heeger is her thesis advisor.

Danielle has focused her other efforts on various different outreach activities and services in support of improving the climate for women graduate students and the support and professional development of graduate students in general. She co-founded the Yale Physics Professional Development Organization that prepares students and postdocs for careers outside academia. She has served as the graduate student representative on the Yale Physics Climate and Diversity Committee, co-founded and organized Yale Women in Physics, and was the liaison for Undergraduate Women in Physics. Danielle is also a McDougal Teaching Fellow at the Yale Center for Teaching and Learning. In addition, Danielle has engaged in a number of education and outreach activities. She is a volunteer for the Yale Physics Olympics, Girls’ Science Investigations, and New Haven Reads. Danielle has also written a number of articles including those for the Yale Graduate School of Arts and Sciences Newsletter on “Third-Year Physics Students Help Newcomers Explore Implicit Bias,” and the Yale Herald on “Committing to Diversity.”

Savannah Thais is currently a 4th year graduate student in the Physics Department. Her research has focused on the ATLAS experiment at CERN’s Large Hadron Collider (LHC) searching for new phenomena that is beyond the Standard Model of particle physics. In her thesis work, Savannah is searching for a so-called “dark sector” vector boson in decays of the Higgs boson. The Higgs may provide a portal or doorway to this sector, since it couples to particles in ways unlike any other in the Standard Model. Savannah received a Leigh Page Prize at Yale in 2014 and is an NSF Fellow. Professor Keith Baker is her thesis advisor.

In addition to her research, Savannah has broad interests in science education, policy, and outreach, with an interest to work in science policy and education. Savannah was one of the Yale Science Diplomats, a science policy and outreach group. She has worked on science-related op-eds, one on diversity in STEM published in The Scientist and is currently working on one about mental health in graduate school. Savannah works on the New Haven Science Fair, tutoring local students to develop projects for the New Haven Science fair. She consults for SENDforC,  a non-profit organization providing free STEM programming in low-income communities with a focus on local community impact. Savannah is active in the ATLAS Outreach (at the LHC). She is an active member of Women in Science at Yale, having served on the board. She has contributed to MADArt, where she worked with an arts collective based in NYC to develop a dance show about quantum physics. Savannah actively participates in Girls Science Investigations, Open Labs, Physics Olympics, and the Math Festival. She serves currently as president of the Graduate and Professional Student Senate, working closely with the Yale administration to improve student life, health care, resource accessibility, diversity and inclusion, school integration, and more.

With no lack of highly-qualified nominees, the selection committee faced a very difficult choice in selection of the Bromley Fellow for this year. Dr. Bromley would be pleased with the work of our nominees and that of the awardees. Yale Physics graduate students are making a difference at Yale, locally, nationally and internationally in so many ways, and we are very proud of them.

The Fellowship is awarded annually to graduate students in Physics who have advanced to candidacy in the Ph.D. program, particularly those “who exhibit a broader interest than just physics, including, but not limited to, science and public policy, engineering, and applied science.” Candidates are nominated by the Physics faculty and selected by the D. Allan Bromley Professor of Physics (currently John Harris) and the Director of Graduate Studies (currently Sean Barrett). The indenture goes on to say, “In this way, the recipients will reflect and celebrate Dr. Bromley’s distinguished and honorable persona in the exceptional scope, standing, talent, and character of his distinguished personal, public, and academic life.”