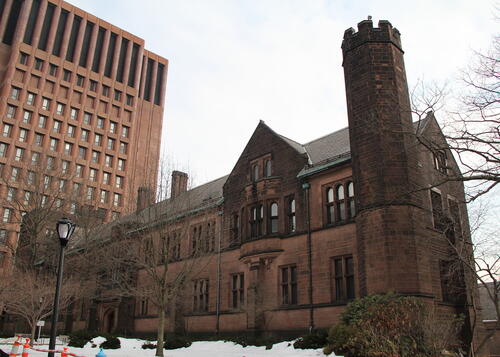 An interdisciplinary study on the properties of waves in symmetric metamaterials, or materials engineered to have properties that do not occur naturally, is set to unlock a new area of physics with a wide range of potential applications.

The Simons Collaboration on Extreme Wave Phenomena Based on Symmetries — a four-year, eight million dollar grant sponsored by the Simons Foundation — was launched this summer and brings together 14 professors from universities across the world, including Yale. The investigators’ fields of expertise range from theoretical physics and applied mathematics to modern optics and acoustics.

Many of the projects supported by the grant are based on the concept of parity-time, or PT, symmetry — the observation that certain systems are invariant when both space and time are reflected. In such systems, remarkable new properties arise, such as those pertaining to the propagation and transport of waves.

The field of PT symmetry was created in 1998 by Carl Bender, professor of physics at Washington University in St. Louis and an investigator on the Simons Collaboration. Bender, who is a mathematical physicist, told the News that he was surprised by the abundance of practical applications that have arisen from his theoretical work on PT symmetry.

Yale applied physics professor A. Douglas Stone, who is another investigator on the grant, told the News that his work is centered on what he calls “reflectionless scattering modes.” He said his main research goal is to construct waves that are absorbed in certain optical devices without being reflected.

Click below for the complete story in the Yale Daily News (November 11, 2020)