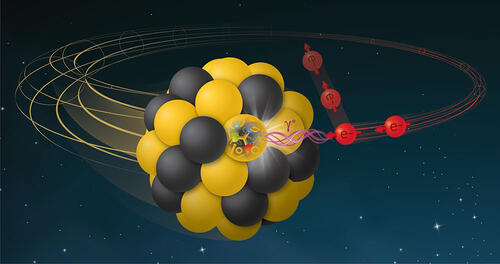 The EIC is a state-of-the-art research facility and partnership among the DOE, New York State, BNL, and the Thomas Jefferson National Accelerator Facility (Jefferson Lab) that will open a new frontier in nuclear physics; a field essential to our understanding of the visible universe with applications in national security, human health, and more.

BNL has a strong research partnership with Yale, and the Wright Lab Relativistic Heavy Ion Group (RHIG) has been involved with the development of the EIC since the beginning.  In particular, Wright Lab adjunct professor Thomas Ullrich has been one of the key players in developing the EIC, and Wright Lab research scientist Nikolai Smirnov is an active member of the EIC Research and Development (R&D) program.

Following DOE’s approval of “mission need” (known as CD-0) in December 2019, this announcement marks the completion of the project’s definition phase and its conceptual design. Approval of CD-1 provides the authorization to begin the project execution phase, starting with preliminary design.

Ullrich presented the Research and Development (R&D) plan for the detector at the CD-1 review, a critical part of the process  towards approval, which was held in January.

RHIG has been developing technologies for detectors at BNL for many years, and their expertise will be invaluable for designing and developing detectors for the EIC.  Additionally, there may be opportunities for Yale researchers to get involved in the data and computing side of the EIC.

More information is available at the BNL press release, linked below.  Part of this article has bene adapted from the press release.