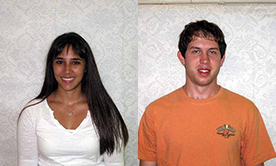 Emma Ideal’s experimental thesis research involves a search for the Higgs boson (which was the basis of the 2013 Nobel Prize in Physics) produced in association with a W or Z boson, in which the Higgs decays to a pair of tau leptons. This effort is a challenging and important thrust of the tau group of the ATLAS collaboration, using the Large Hadron Collider (LHC) at CERN. Emma’s Ph.D. thesis work is under the supervision of Prof. Sarah Demers of the Physics Department.

Emma enjoys sharing her enthusiasm for physics with the broadest possible audience, and encouraging others to pursue science. As just one example, she recently co-edited and self-published the book: “Blazing the Trail: Essays by Leading Women in Science”.
Emma was also selected as “Woman Physicist of the Month” in October, 2013, by the American Physical Society’s Committee on the Status of Women in Physics.

Chris McKitterick’s experimental thesis research involves the quest to produce of world-class photon detector in the TeraHertz/far-infrared region of the electromagnetic spectrum, using the two-dimensional material known as graphene (which was the basis of the 2010 Nobel Prize in Physics). A key issue in this project is developing a quantitative understanding of the complicated steps between the capture of a photon and the re-equilibration of the system.  Chris is performing his research under the supervision of Prof. Daniel Prober.

Chris enjoys using the quantitative skills he developed as a physicist to address questions of importance for the community at large. For example, he used his skills to contribute to a New Haven Mayoral Campaign, and he is working with several groups (including a Yale Law School Clinic) concerned about land use in the state, with the goal of motivating policy initiatives in the Connecticut Legislature. Chris has been taking courses in Forestry and Environmental Studies, as well as in the School of Management, to prepare himself for a possible career in science policy.

The selection committee faced a tough choice this year, with a record number of highly-qualified applicants. Dr. Bromley would be thrilled to see the many ways that Yale Physics graduate students are making a difference at Yale, and beyond.

The Fellowship is awarded annually to graduate students in Physics who have advanced to candidacy in the Ph.D. program, particularly those “who exhibit a broader interest than just physics, including, but not limited to, science and public policy, engineering, and applied science.” Candidates are nominated by the Physics faculty and selected by the D. Allan Bromley Professor of Physics (currently Rick Casten) and the Director of Graduate Studies (currently Sean Barrett). The indenture goes on to say, “In this way, the recipients will reflect and celebrate Dr. Bromley’s distinguished and honorable persona in the exceptional scope, standing, talent, and character of his distinguished personal, public, and academic life.”