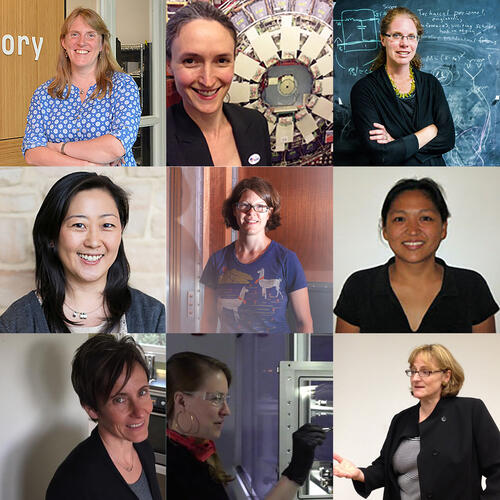 February 11th is the 6th International Day of Women and Girls in Science.  This annual celebration, initiated by a resolution of the United Nations in 2015, recognizes the critical role that women and girls play in science and technology.

Helen Caines, professor of physics, uses heavy-ion experiments, such as the international STAR collaboration experiment based at the Relativistic Heavy Ion Collider (RHIC) located at the Department of Energy’s Brookhaven National Laboratory (BNL) on Long Island in New York and the ALICE experiment at the Large Hadron Collider (LHC) at CERN in Geneva, Switzerland, to study the behavior of nuclear matter under extremes of temperature and density.

The RHIC collaborations have confirmed that the Quark Gluon Plasma (QGP), a deconfined state of quarks and gluons, exists when energy densities of more than 6 times nuclear matter are reached. Such extreme conditions can be created in the laboratory when ultra-relativistic heavy ions are collided.  Caines is now focused on measuring the high momentum particles produced in the collisions, and how they interact with the QGP. The results of these studies will teach us more about the properties of this new state of matter.

Caines is the co-spokesperson for the STAR collaboration and is a collaborator on both the STAR and ALICE experiments.

Caines is an advocate for diversity, equity, and inclusion in STEM.  Among the courses she has taught at Yale is the Being Human in STEM course, which examines how gender, race, socioeconomic background, religion and sexuality shape the STEM experience, and she is both the chair of the Yale Physics Department’s Climate and Diversity Committee (CDC) and the co-chair of the Yale APS-IDEA team.

Sarah Demers, Horace D. Taft Associate Professor of Physics, uses tau leptons to probe for and characterize physics beyond the standard model with the ATLAS experiment at the LHC and hunts for signs of new physics at the Mu2e Experiment at Fermi National Accelerator Laboratory (Fermilab) in Illinois.

Demers is the ATLAS Deputy Data Preparation convener, was formerly a co-convener of the ATLAS Upgrade Physics group, was co-lead on the ATLAS Data Quality Group, and is the chair of the US ATLAS Institute Board. With her leadership, Yale is an ATLAS Trigger and Data Acquisition Institute with design and validation responsibilities.

For Mu2e, her group is heavily engaged with the trigger development, she is on the publications board, and she led the “Engaging Non-Experts” group to help new people transition into the collaboration by developing computing tutorials and documentation.

Demers has received several university awards for teaching, including the Provost Teaching Award and the Yale Poorvu Family Award for Interdisciplinary Teaching.  Her courses include both fundamental physics courses and courses intended to engage students in the sciences through interdisciplinary intersections, such as The Physics of Dance and The Physics of Music.

Demers is engaged with bringing science to the public realm and advocating for the equality of women in science through radio appearances, OpEds, podcasts, outreach experiences, and a variety of in-person events.

The Yale Physics Department has hosted the American Physical Society Undergraduate Conference for Women in Physics (CUWiP) multiple times over the past fifteen years. Almost every time, one of our faculty mentors has been the Faculty advisor/mentor for our undergraduate women organizing the conference.  Demers was the most recent faculty advisor for the CuWiP at Yale in January of 2020.

Fleming is the founding spokesperson of the MicroBooNE collaboration at Fermilab, and its current scientific co-spokesperson. Her group has been involved in the MicroBooNE experiment on all levels, from fabrication and assembly of the Time Projection Chamber (TPC), with liquid Argon-based technology she helped develop, and the Data Acquisition systems; to development of the analysis techniques and tools necessary to analyze the data; to oversight of the collaboration.

Fleming is the founding spokesperson of the ArgoNeuT experiment and current collaborator on the ArgoNeuT, LArIAT, SBND, and future DUNE experiments at Fermilab.  Concurrently, the group is developing the next generation of accelerator neutrino detectors – Liquid Argon Time Projection Chambers (LArTPC)—for  all of these programs.

She also initiated the Girls Science Investigations through her NSF CAREER grant in 2006. This is a Saturday program for 6-8th grade girls in New Haven, where they engage in hands-on science experiments at Yale, guided by a team of volunteer mentors. It continues today with private donations and funding through Yale University. Many of our other faculty mentors, postdocs, and undergraduate and graduate students at Wright Lab also participate in this quarterly outreach activity.

See also Fleming’s recent Who’s Who at the Lab feature.

Reina Maruyama, associate professor of physics, designs and carries out cutting-edge experiments to study neutrinos and dark matter in nuclear particle astrophysics. The aim of these experiments are to solve some of the greatest mysteries of the evolution of the Universe–what is the Universe made of, and why does it have more matter than anti-matter?

Maruyama is involved in the leadership of multiple collaborative experiments. She is the PI and Scientific Co-Spokesperson of COSINE-100, a dark matter detector located at the Yangyang Underground Laboratory in South Korea designed to test the claims  that DAMA has directly detected a dark matter signal; this experiment continues the DM-Ice experiment, for which Maruyama is also PI and Scientific Co-Spokesperson.  Maruyama is co-PI of HAYSTAC, a dark matter detector searching for axions located at the Yale Wright Laboratory, and is the Chair of the CUORE council, an experiment the Laboratori Nazionali del Gran Sasso (LNGS) in Assergi, Italy searching for neutrinoless double-beta decay.  She has held several scientific and technical leadership positions at the IceCube Neutrino Observatory, located at the South Pole.

Maruyama is an author of 200+ publications and has presented her work in numerous conferences and workshops. She is often quoted in popular science press such as APS News, Nature News, Science News, and Symmetry Magazine for her work on dark matter and neutrinoless double beta decay.

Maruyama is the recipient of several awards, including the Sloan Research Fellowship, NSF CAREER Award, Yale Public Voices Fellowship, and Woman Physicist of the Month from CSWP.

She was chosen by Ingenium to be featured on a poster for their Women in STEM initiative, intended to engage, advance and retain the interest of young women in the STEM fields.

Maruyama also shared her expertise on “Strategies for dealing with micro-aggressions or implicit bias” at the 2019 Granville Academy, a week of diversity and inclusion workshops for undergraduate students doing summer research in astronomy and physics that is co-organized by Wright Lab and the Yale Department of Astronomy.

See also Maruyama’s recent Who’s Who at the lab feature.

Laura Newburgh, assistant professor of physics, is an experimental astrophysicist and cosmologist who builds instruments to chart the past 13 billion years of cosmic history: measuring the Cosmic Microwave Background with millimetre-wave telescopes and Large Scale Structure with radio telescopes. The resulting data sets will probe the nature of Dark Energy, Dark Matter, the sum of neutrino masses, and cosmic inflation. Her work spans hardware, software, and analysis for CMB and 21cm cosmology through her current projects CHIME, HIRAX, Simons Observatory, and CMB-S4.

She has done outreach with the Yale Pathways Summer Scholars program, including a workshop where about thirty high school students observed laboratory star-fields using backyard telescopes to learn about resolution and magnification.

Ramos began this work as physics faculty for the Summer Medical and Dental Education Program at Yale (now named the Summer Health Professions Education Program), a program designed to support and uplift underrepresented populations in medicine and healthcare. She has taught several introductory physics courses in the department, which have been infused with pedagogical innovations and inclusive teaching practices that open access to a broader range of students with a diversity of backgrounds and perspectives.

Ramos co-created and teaches the course Physics 530: The Theory and Practice of Scientific Teaching, a course which aims to improve undergraduate science education by training future faculty in the practice of inclusive teaching and evidence teaching methods.  She is also currently an instructor for Being Human in STEM, a course which explores the lived experiences of underrepresented identities in STEM and the barriers they face in the scientific community.

As the co-director of Girls Science Investigations, Ramos has developed fun and engaging science activities for middle school girls that includes building robots that draw and paper circuit greeting cards. She is also the co-leader of the  APS-IDEA team at Yale.

As the graduate program coordinator, Ramos focuses on supporting the growth and well-being of our graduate students, and making this a welcoming and exciting program for future students.

Adriane Steinacker, senior lecturer in physics, has taught a wide variety of undergraduate courses at all levels, ranging from the History of Astronomy to Astrobiology to Solar System Dynamics. She has also taught a course on Scientific Communication for Physicists. Currently, she is teaching Yale’s Physics 180/181 sequence.

Prior to choosing a career in the physics and astronomy teaching, Steinacker worked at NASA Ames Research Center, and published research on space physics, planet formation, and the magnetohydrodynamics of accretion disks.

Alison Sweeney, associate professor of ecology and evolutionary biology and of physics, focuses on the mechanisms by which novel materials arise in natural evolution, and the mechanisms by which evolution finds novel routes to self-assembly. Recent examples of this include work on self-assembly of gradient-index lenses in squids, and micron-scale surface textures in pollen. A recent Science Friday short film on their work provides a nice introduction to her program: https://www.sciencefriday.com/videos/a-squids-eye-view/

Meg Urry, the Israel Munson Professor of Physics and Astronomy, and Director of the Yale Center for Astronomy and Astrophysics, researches active galaxies, which host accreting supermassive black holes in their centers. She has published over 330 refereed research articles on supermassive black holes and galaxies, including one of the most highly cited review papers in astronomy.

Professor Urry is also known for her efforts to increase the number of women and minorities in science, for which she won the 2015 Edward A. Bouchet Leadership Award from Yale University and the 2010 Women in Space Science Award from the Adler Planetarium.  She regularly writes and speaks about this issue in both professional and public venues.  She has chaired the American Astronomical Society’s Committee on the Status of Women in Astronomy, and re-invented its newsletters AASWOMEN and STATUS .  She organized the first conference on Women in Astronomy in 1992, which issued the Baltimore Charter, and a decade-later conference at Caltech in 2003, for which she is currently editing the Proceedings. She helped organize the American Physical Society’s 2007 Gender Equity Conference, and was elected a Fellow of the Association of Women in Science in 2006.

In 2002 she created the “flipped” classroom version of introductory Physics at Yale, and she is the founding Physics instructor for the Global Teaching Project, which provides advanced courses to promising high school students in under-served areas, beginning with a pilot program in rural Mississippi. She also writes about science for CNN.com.