Home » News » Jared Rovny (Graduate Student) has been named the receipent of the 2019 D. Allan Bromley Graduate Fellowship in Physics

Jared Rovny (Graduate Student) has been named the receipent of the 2019 D. Allan Bromley Graduate Fellowship in Physics 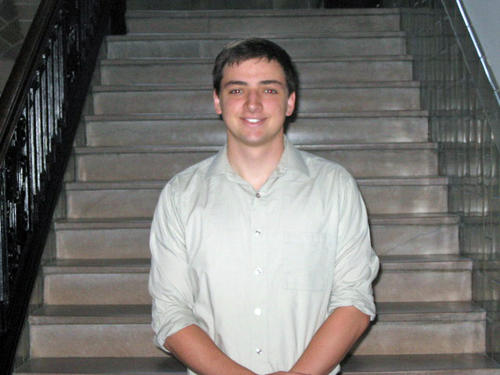 It is a great pleasure to announce that Jared Rovny is the recipient of the 2018-2019 D. Allan Bromley Graduate Fellowship in Physics.

The Fellowship is awarded annually to a graduate student in Physics who has advanced to candidacy in the Ph.D. program, particularly those “who exhibit a broader interest than just physics, including, but not limited to, science and public policy, engineering, and applied science.” Candidates are nominated by the Physics faculty and selected by the D. Allan Bromley Professor of Physics (John Harris) and the Director of Graduate Studies (Fall term Nikhil Padmanabhan). The indenture goes on to say, “In this way, the recipients will reflect and celebrate Dr. Bromley’s distinguished and honorable persona in the exceptional scope, standing, talent, and character of his distinguished personal, public, and academic life.”

Jared Rovny is a sixth year graduate student in the research group of Sean Barrett in the Physics Department. His thesis research covers a broad range of topics in experimental condensed matter physics. He was the first author on two papers that reported the first evidence for Discrete Time Crystal Signatures in a clean, dipolar solid (a real spatial crystal). He co-authored a paper submitted on the group’s Difference Map method (DiffMap) to accelerate 2D NMR experiments, and he is the first author on a submitted paper that extends this method. His talk at the 2015 ENC Conference was part of a special Prize Student Symposium at that meeting.

In addition to his research accomplishments, Jared excels at improving physics education and academic life for others. He won the Yale College Prize Teaching Fellowship, for his work in PHYS 171 (University Physics for the Life Sciences),  considered to be among the most important honors that Yale bestows upon its graduate students. Jared became a McDougal Graduate Teaching Center (MGTC) Fellow, for the Poorvu Center for Teaching and Learning in 2015, helping to lead the Physics Departmental workshop on the “Fundamentals of Teaching Physics.”  He helped design and lead a large “Teaching at Yale” event, with over 200 participants, ran orientations in other departments, offered teaching consultations to other teaching fellows, and helped support the work of many other MGTC fellows. He helped to develop the online course, “Movie Physics” and was in charge of half of the online lectures. He later co-presented details at a Yale Educational Technology Symposium. Jared also served as the Program Overseer for the “Online Experiences for Yale Scholars” and managed a team of undergraduate coaches as science mentors for incoming Yale College students. He prepared and offered a series of recorded lectures about physics for the MCAT in 2016, and has served as a volunteer for the Yale Physics Olympics.

As is often the case, this year’s selection committee faced a very difficult choice because a number of very high-quality nominations were received.   Please join me in congratulating Jared on this great accomplishment.