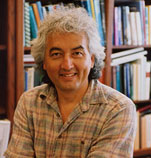 Endowed chairs at Yale are awarded to those whose scholarship has brought distinction to the University. John’s research in relativistic heavy ion nuclear physics is distinguished by both his many scientific achievements and his strong leadership within the field. The D. Allan Bromley Professorship is a fitting endowed chair because John also has a passion for nuclear physics and a deep commitment to Yale that marked Allan Bromley’s exemplary career. Please join me in congratulating John.