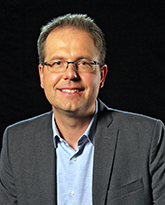 Karsten Heeger, Wright Lab Director and Chair of the Physics Department, has been chosen as the next co-Chair of the Coordinating Panel for Advanced Detectors (CPAD) of the Division of Particles and Fields (DPF) of the American Physical Society (APS), along with Petra Merkel from Fermilab.  Heeger and Merkel succeed Ian Shipsey from Oxford and Marcel Demarteau from Oak Ridge National Laboratory, who have led CPAD since its inception in 2012.

CPAD has the responsibility to promote excellence in the research and development of instrumentation and detectors to support the national program of particle physics in a global context.

Shipsey and Demarteau commented, “We are thrilled by the choice of Petra and Karsten to succeed us as co-Chairs of CPAD; they have a  wealth of experience and proven leadership  and will be steady hands at the tiller as CPAD continues to fulfill its mission.”

Heeger and Merkel responded, “This is an exciting time to assume the leadership of CPAD with the recent DOE BRN for Detectors concluding and the new Snowmass process just starting. There are a lot of new instrumentation ideas in the community that have the potential to transform the physics reach of the next generation of experiments. We believe that we are at a crucial junction where we are in need of revolutionary breakthroughs in technology rather than evolutionary advances. It will be very important to look carefully outside the boundaries of classic HEP instrumentation and adapt technologies from other fields, such as quantum sensing, as well as advanced materials, condensed matter, and Artificial Intelligence. We believe CPAD can assist the Snowmass process with the organization of interdisciplinary workshops and through its close ties to international bodies such as ICFA and domestic agencies, including DOE and NSF. We are looking forward to refreshing the CPAD membership and its various committees, and to working closely with the outstanding instrumentation community in the US. We are very grateful to Ian and Marcel for their guidance and leadership and are determined to continue the impactful way in which CPAD has helped shape the field.”