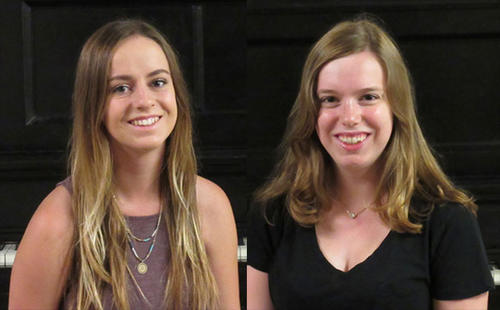 It is a pleasure to announce that Kelly Backes and Emma Castiglia have been named co-recipients of the 2019-2020 D. Allan Bromley Graduate Fellowship in Physics.

Kelly Backes is entering the 5th year in her graduate studies at the Wright Laboratory of the Physics Department working on the HAYSTAC axion dark matter experiment with Prof. Steve Lamoreaux and Reina Maruyama. Kelly implemented the first quantum squeezed state receiver system in a particle (astro) physics experiment, bringing together the fields of quantum information and particle physics in an unprecedented way. She designed the RF circuitry that controls the squeezed state receiver, couples it into the RF cavity that is the heart of the detector, and also guides signal paths to the data acquisition system. She wrote the acquisition and analysis software packages to control the squeezed state receiver system and incorporated computational parallelization. Kelly also independently developed the software package that will acquire months of continuous dark-matter-sensitive data and control the mechanics of the experiment, including the optimization and alignment protocol for the quantum-limited amplifier system. Her research supervisor says this will be a watershed breakthrough in the axion dark matter field.

Kelly received a Leigh Page Prize Graduate Fellowship in the Yale Physics Department in coming to Yale. Kelly continues to be very active in advocacy, service, outreach and educational programs while a graduate student at Yale. She serves on the Graduate and Professional Student Senate currently as Chair of the Advocacy Committee, past Deputy Chair of the Advocacy Committee, and as a Senator and Summer Fellow in 2018. Kelly serves on the Title IX Student Advisory Board and the Yale Health Student Advisory Board. She also has served on the Re-accreditation Committee-Education Effectiveness. Kelly has been involved in the Yale Physics Olympics and Girls’ Science Investigations outreach activities. She assisted in upgrading experiments and grading rubrics in the Physics 206 Lab, helped develop lab exercises for the inaugural Physics 210 electronics class, and continues to assist in updating and teaching Physics 382 Lab. In addition, Kelly has mentored undergraduate students and general volunteers to mentor 1st and 2nd year graduate students in the department.

Emma Castiglia is entering her 5th year in graduate physics at Yale.  She has extensive experience in high energy physics (HEP) on the ATLAS experiment at CERN’s Large Hadron Collider (LHC) and Mu2e experiment at FermiLab. Working with Professor Sarah Demers, she is on track to graduate with a thesis on the Higgs Boson in ATLAS. Emma has played a strong role in advocacy in the Physics Department at Yale. She has collaborated to provide recommendations on the curriculum and qualifying exam,  and has been involved in Yale Physics Olympics and Girls’ Science Investigations outreach. Emma serves as a board member of the “Yale Physics Professional Development Organization,” helping coordinate monthly seminars and panels to prepare graduate students and postdocs for academic and non-academic job search. She is working on their panels for “Paths to a Liberal Arts Teaching Job” and “Recent Female Alumnae in Academia & Industry.”

Emma serves many functions in Women in Physics (WIP) at Yale. She is chair of the graduate student group, co-chair of the “Equity in the Job Search” Symposium in which she ran the fundraising sub-committee, organized a keynote address and non-academic career workshop, and chaired this year’s online symposium. Emma established the WIP Advocacy Group working with allies to create a physical display in SPL to honor Yale Physics Alumnae and a mentoring program between graduate and undergraduate women.  She organized a letter from WIP to Dean Brock outlining qualities desired in a department chair. Emma proposed and helped organize a WIP event at our Graduate Open Houses and was a volunteer at the Yale CUWIP. She has been a one-on-one mentor for Women in Science at Yale since her arrival. Emma has broad interests that include the overall HEP community having served on the organizing committee for a US ATLAS Annual Meeting. She has been a regular attendee of the annual advocacy funding trip to Washington DC for funding for HEP. She has been an advocate for ethics in machine learning attending two summer schools related to machine learning: “Deep Learning for Science” and “Third Computational and Data Science School for HEP” and participated in group discussions surrounding AI and Ethics at the Yale.

The selection committee faced a very difficult choice in selection of the Bromley Fellow for this year. Dr. Bromley would be pleased with the work of the awardees. Yale Physics graduate students are making a difference at Yale, locally, nationally and internationally in so many ways, and we are very proud of them.

The Fellowship is awarded annually to graduate students in Physics who have advanced to candidacy in the Ph.D. program, particularly those “who exhibit a broader interest than just physics, including, but not limited to, science and public policy, engineering, and applied science.” Candidates are nominated by the Physics faculty and selected by the D. Allan Bromley Professor of Physics (currently John Harris) and the Director of Graduate Studies (currently Bonnie Fleming). The indenture goes on to say, “In this way, the recipients will reflect and celebrate Dr. Bromley’s distinguished and honorable persona in the exceptional scope, standing, talent, and character of his distinguished personal, public, and academic life.”