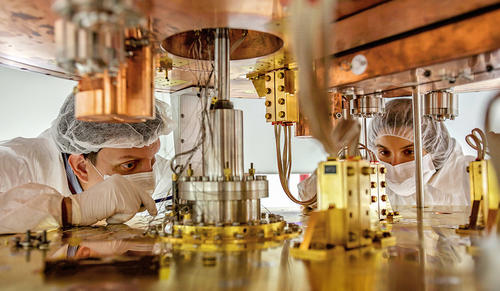 Yale Physics researchers, part of an international collaboration called the Cryogenic Underground Observatory for Rare Events (CUORE), are searching for evidence of a rare particle process called neutrinoless double-beta decay. Finding it would have profound implications for understanding neutrinos — the ghostly, plentiful particles that pass through most matter in the universe without being affected themselves. The process might also help explain why there is more matter in the universe than antimatter (which has the same mass as matter, but an opposite electric charge).

CUORE recently released two years’ worth of data collection, from 2017 to 2019. It represents a dataset four times larger than the initial CUORE results announced in 2017, which at that time established the most precise measurement for the experiment.

While the new result did not show evidence of neutrinoless double-beta decay, it yielded a better idea of a neutrino’s mass during such a process. The CUORE detector is sensitive to a particle mass less than one-tenth of an electronvolt — or at least 5 million times lighter than an electron.

See the YaleNews article  and the study for more information.