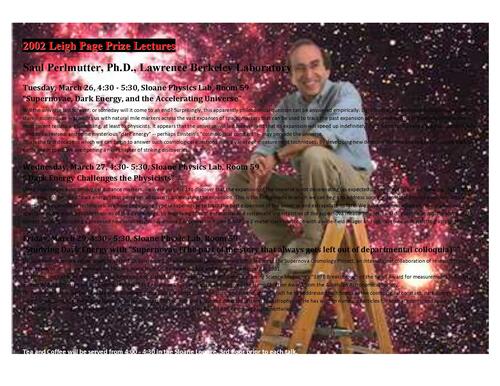 Dr. Saul Perlmutter is a senior scientist at the E.O. Lawrence Berkeley National Laboratory. He is the leader of the Supernova Cosmology Project, an international collaboration of research teams from seven countries. He received his PhD in physics from UC Berkeley in 1986 and his AB from Harvard in 1981.

Dr. Perlmutter has been honored by the American Association for the Advancement of Science, receiving Science Magazine’s “1998 Breakthrough of the Year” Award for measurements indicating an accelerating universe. He is an elected Fellow of the American Physical Society, and received the Henri Chretien Award from the American Astronomical Society.

Dr. Perlmutter is the author of more than 70 papers in the fields of physics, astrophysics, and cosmology, in which he has addressed such topics as the cosmological constant, dark energy, supernovae, pulsars, gravitational lenses, massive compact halo objects and advanced detector systems for astrophysics. He has written numerous articles for both academic and popular publications, is a frequently invited lecturer and author, and has appeared in PBS and BBC cosmology documentaries.

Will the universe last forever, or someday will it come to an end? Surprisingly, this apparently philosophical question can be answered empirically. Light from the cataclysmic explosions of distant stars – supernovae – provides us with natural mile markers across the vast expanses of space, markers that can be used to track the past expansion of the universe and extrapolate its fate. The most recent results are unsettling, at least to physicists. It appears that the universe will last forever, and that its expansion will speed up indefinitely. If so, some fundamental physics concepts may need to be revised, and some mysterious “dark energy” – perhaps Einstein’s “cosmological constant” – may pervade the universe.

This is the first decade in which we can begin to answer such cosmological questions with a variety of measurement techniques. By developing new detector systems and larger telescopes both on earth and in space we are opening a new chapter of striking discoveries.

Using supernovae as cosmological distance markers, we were surprised to discover that the expansion of the universe is not decelerating (as expected due to gravity), but accelerating. Apparently, some new, unidentified “dark energy” that pervades all space is accelerating the expansion. This is the first decade in which we can begin to address such fundamental physics questions with a variety of measurement techniques. We have been using Type Ia supernovae to track the past expansion of the universe and extrapolate its fate. We have now embarked on new studies using this approach to constrain possible theories of this dark energy, by improving both the statistical and systematic uncertainties of the supernova measurements. I will discuss the ambitious scope of the current projects, including a proposed new satellite, the Supernova / Acceleration Probe (SNAP), a 2-meter class telescope with a wide-field imager and optical-to-near-IR spectrograph system.

March 29, 2002 - “Studying Dark Energy with “Supernovae (The part of the story that always gets left out of departmental colloquia)”