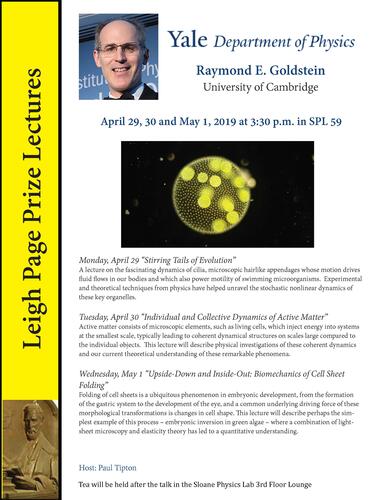 The Yale Physics 2019 Leigh Page Prize Lectures were held April 29th, April 30th and May 1st 2019 by Raymond E. Goldstein of the University of Cambridge.

A lecture on the fascinating dynamics of cilia, microscopic hairlike appendages whose motion drives fluid flows in our bodies and which also power motility of swimming microorganisms. Experimental and theoretical techniques from physics have helped unravel the stochastic nonlinear dynamics of these key organelles.

Active matter consists of microscopic elements, such as living cells, which inject energy into systems at the smallest scale, typically leading to coherent dynamical structures on scales large compared to the individual objects. This lecture will describe physical investigations of these coherent dynamics and our current theoretical understanding of these remarkable phenomena.

Wednesday, May 1, 2019 - Upside-Down and Inside-Out: Biomechanics of Cell Sheet Folding

Folding of cell sheets is a ubiquitous phenomenon in embryonic development, from the formation of the gastric system to the development of the eye, and a common underlying driving force of these morphological transformations is changes in cell shape. This lecture will describe perhaps the simplest example of this process – embryonic inversion in green algae – where a combination of light-sheet microscopy and elasticity theory has led to a quantitative understanding.