Home » News » Marco Bonett-Matiz has been named the recipient of the 2015 D. Allan Bromley Graduate Fellowship in Physics

Marco Bonett-Matiz has been named the recipient of the 2015 D. Allan Bromley Graduate Fellowship in Physics 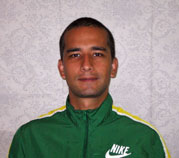 It is a great pleasure to announce that Marco Bonett-Matiz has been named the recipient of the 2015 D. Allan Bromley Graduate Fellowship in Physics.

As you may know, Marco Bonett-Matiz’s  thesis research is in theoretical nuclear many-body theory.  It involves the application of a quantum Monte Carlo approach in the framework of the configuration-interaction shell model.  The auxiliary-field quantum Monte Carlo (AFMC) method is among the most powerful computational tools for the study of strongly correlated systems such as nuclei and strongly correlated electron systems (in condensed matter physics).  Recently, Marco has been working on an approach using AFMC to calculate excited states, which is an important and challenging goal.

Marco has broad interests beyond physics, focusing on the areas of science education, and community service.  Marco taught the PHYS S181 E&M course for four summers in a row, and served as a Physics and Math tutor for the Yale Science & Quantitative Reasoning Program.  Marco has volunteered for Integrated Refugee & Immigrant Services (IRIS), helping refugees to get settled in New Haven.  In addition to participation at national conferences dedicated to science outreach and diversity, Marco has mentored, together with other Yale graduate students and postdocs, science projects at the Metropolitan Business Academy Magnet High School in New Haven.

The selection committee faced another tough choice this year, with many highly-qualified applicants. Dr. Bromley would be thrilled to see the many ways that Yale Physics graduate students are making a difference at Yale, and beyond.

The Fellowship is awarded annually to graduate students in Physics who have advanced to candidacy in the Ph.D. program, particularly those “who exhibit a broader interest than just physics, including, but not limited to, science and public policy, engineering, and applied science.” Candidates are nominated by the Physics faculty and selected by the D. Allan Bromley Professor of Physics (currently Rick Casten) and the Director of Graduate Studies (currently Sean Barrett). The indenture goes on to say, “In this way, the recipients will reflect and celebrate Dr. Bromley’s distinguished and honorable persona in the exceptional scope, standing, talent, and character of his distinguished personal, public, and academic life.”