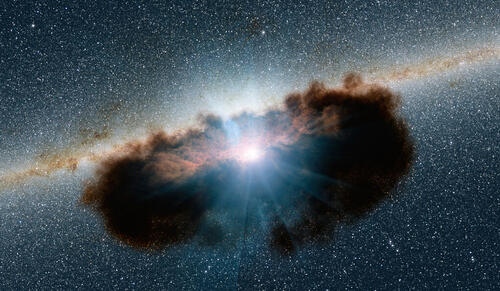 Yale astrophysicists have helped assemble an unprecedented census of the most powerful, growing supermassive black holes in the universe.

Using data from NASA’s Swift satellite and a collection of ground-based telescopes — including the ESO Very Large Telescope in northern Chile, the Hale telescope at Palomar observatory in southern California, and the Keck telescope in Hawaii — scientists from the BASS Project have collected data for more than 850 growing black holes across the sky.

The new census includes detailed measurements of the emission lines, black hole masses, and distances from Earth for dozens of previously unrecognized systems. The BASS Project has unveiled much of the data in a special issue of the Astrophysical Journal that includes nine research studies drawn from the census.

“We joined the BASS Project because of our keen interest in understanding the growth and evolution of supermassive black holes,” said C. Megan Urry, the Israel Munson Professor of Physics and Astronomy in the Yale Faculty of Arts and Sciences and director of the Yale Center for Astronomy & Astrophysics. “The great instrumentation at the Palomar and Keck telescopes has been crucial for obtaining estimates of black hole masses in this sample, which is by far the largest set of homogeneously selected, well-characterized supermassive black holes.”

This story was excerpted from the Yale News story of August 2, 2022 by Jim Shelton. Click below for the full story and to the article in the Astrophysical Journal.