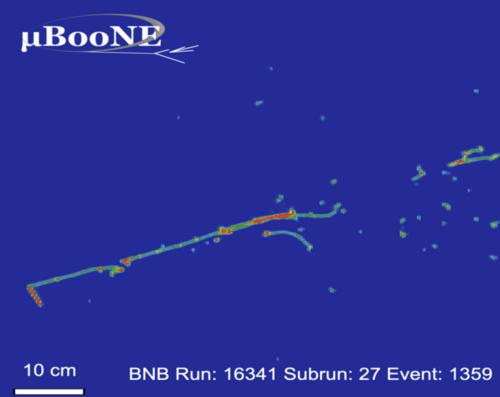 Researchers in the Yale High Energy Physics group, led by Wright Lab professor Bonnie Fleming, along with the Micro Booster Neutrino Experiment (MicroBooNE) collaboration, have been searching since 2008 for evidence of an anomaly, first seen in a previous experiment called MiniBooNE, that could potentially have been a theoretical new particle called the sterile neutrino.  If evidence of a sterile neutrino were found, it would require scientists to reconsider what is known as the “Standard Model of Particle Physics” and be a radical shift in our understanding of the basic building blocks of the universe.

On October 27, 2021, the MicroBooNE collaboration announced that MicroBooNE’s first results, coming from four separate analyses, do not find a hint of the sterile neutrino.  This result is the most comprehensive finding thus far for an accelerator-based search for sterile neutrinos (other searches, including Yale’s PROSPECT experiment, are based at nuclear reactors).

MiniBooNE saw an excess of low-energy events, but could not distinguish between electrons and photons, a crucial piece of information for determining whether sterile neutrinos exist.

MicroBooNE enabled a more precise look into the neutrino interactions and the particles emerging from it (electrons and photons).

MicroBooNE has made a comprehensive exploration of the anomaly (excess low-energy events) through multiple channels, analyses, and reconstruction techniques.  As a result, researchers now know that what MiniBooNE saw was not caused solely by electrons, and is not single photons from their most likely source. The fact that it is not electrons means that it is unlikely to be sterile neutrinos.  Therefore, it now seems that that the standard theorized sterile neutrino is not the likely explanation for previous anomalies and scientists are investigating other possibilities.

“MicroBooNE has made a very comprehensive exploration through multiple types of interactions, and multiple analysis and reconstruction techniques,” said Fleming, who is also co-spokesperson for MicroBooNE. “They all tell us the same thing, and that gives us very high confidence in our results that we are not seeing a hint of a sterile neutrino.”

Various researchers in Fleming’s group at Wright Lab have been integral to the analyses that led to this new result, with part of the group investigating electrons and the other part investigating single photons.

Wright Lab postdoctoral associate Jay Hyun Jo is co-leading (along with former Brookhaven National Laboratory (BNL) postdoctoral associate Hanyu Wei) the Wire-Cell analysis, which is the most sensitive and inclusive of the new analyses exploring electron neutrinos in the experiment. Other Wright Lab researchers who have contributed to the Wire-Cell analysis are Xiao Luo (now faculty at the University of California, Santa Barbara) and graduate students London Cooper-Troendle and Kaicheng Li. Yale Physics Ph.D. alum Brooke Russell (now an Owen Chamberlain Postdoctoral Fellow at Lawrence Berkeley National Laboratory) also contributed to this in her dissertation work. In addition to those at Yale and BNL, collaborators on this effort include researchers from the University of California-Santa Barbara and the University of Michigan.

According to Jo, the Wright Lab group has played an indispensable role in the overall Wire-Cell analysis, from developing tools to accurately reconstructing events in the LArTPC, to selecting and analyzing electron neutrino events from the muon neutrino-dominant beam.

“We were able to take full advantage of the advanced detector technology, combined with excellent reconstruction and analysis technique, to achieve the most sensitive result,” Jo said. “This result will be taking the neutrino physics community in a new direction, and all of us in the Yale group are proud to be a driving force of the effort.”

Wright Lab graduate students Lee Hagaman and Giacomo Scanavini are leading efforts in the next phase of the experiment, searching for the source of the anomaly in single photon mode.

According to Hagaman and Scanavini, with the electron hypothesis disfavored, a deep investigation into photons becomes even more important to the overall understanding of the MiniBooNE low energy excess. Using advanced 3D reconstruction algorithms, the Wright Lab group is studying a wide variety of different types of neutrino events that contain a single photon, exploring beyond the neutrino-induced neutral current (NC) Δ→Nγ  photon hypothesis which was also disfavored by recent MicroBooNE results. For this purpose, the group is developing a high-performance NC  π0 selection, which will help to reduce uncertainties related to neutrino events in which two photons are created, but one is difficult or impossible to see in the detector.

Hagaman said, “These results are very exciting! They really make us think differently about the global state of neutrino anomalies and sterile neutrino hypotheses, while leaving many unanswered questions to continue studying.”

Scanavini said, “The result released in these days is a milestone not only for the MicroBooNE collaboration but for the whole neutrino physics community. This is the product of many years of hard work and it’s an achievement that wouldn’t be possible without the cooperation of many scientists working together. Independently on the outcome, this is really exciting.”

More about MicroBooNE and Wright Lab

MicroBooNE is a 170-ton liquid-argon neutrino detector at Fermilab that was originally proposed by Fleming, the founding spokesperson for MicroBooNE (co-spokesperson since 2012) to investigate the MiniBooNE anomaly.  For this experiment, the Fleming group realized a cutting-edge detector technology that originally had been developed in Europe, but not yet used in an experiment, called a liquid-argon time projector chamber (LArTPC).  The group built  MicroBooNE’s LArTPC at Wright Lab and continues to further research and develop the LArTPC technology for current and future neutrino experiments such as SBND and DUNE.

MicroBooNE has demonstrated the first successful long-term operation of the LArTPC technology.  In an interview with Jim Shelton of Yale News, Fleming notes that “a critical takeaway from this [new] result is that LArTPC detectors can be used very successfully for precision neutrino physics” and that there is a “long line of neutrino experiments now using this technology”.

In addition to developing the LArTPC, the Fleming group developed the analysis techniques and tools necessary to analyze the data and provides oversight of the collaboration.

This article includes material from a Yale News Q&A by Jim Shelton, the Fermilab Office of Communications, and a Fermilab press release.