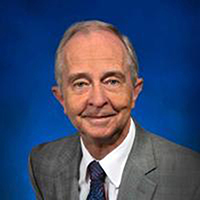 Wright Lab and Yale Physics welcome Berndt Mueller as a visiting professor for the Spring 2022 semester.

Mueller is the J.B. Duke Distinguished Professor of Physics at Duke University and is the former Associate Laboratory Director for Nuclear and Particle Physics at the U.S. Department of Energy’s Brookhaven National Laboratory.

Prof. Mueller’s work focuses on nuclear matter at extreme energy density. Quantum chromodynamics, the fundamental theory of nuclear forces, predicts that nuclear matter dissolves into quarks and gluons, the elementary constituents of protons and neutrons, when a critical density or temperature is exceeded. He and his collaborators are theoretically studying the properties of this “quark-gluon plasma”, its formation, and its detection in high-energy nuclear collisions. His other research interests include symmetry violating processes in the very early universe and the chaotic dynamics of elementary particle fields. Prof. Mueller is the coauthor of textbooks on the Physics of the Quark-Gluon Plasma, on Symmetry Principles in Quantum Mechanics, on Weak Interactions, and on Neural Networks.

More information about Mueller can be found at his profile on the Scholars@Duke webpage.