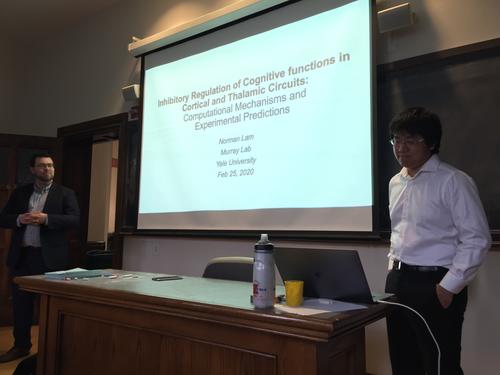 Lam explained “Our ability to think can be understood in terms of a set of basic cognitive functions: how we make decisions, how we hold information in mind, how we dedicate mental resource based on current demand, and so on. Cognitive function ultimately arises from the interactions of numerous neurons in the brain. In fact, neurons in various brain areas are known to connect in specific patterns to act collectively as a ‘neural circuit’, which reflects computations processes during cognitive functions.

In my thesis, we used computational and mathematical modelling to study the computations in neural circuits during decision making, working memory, and attention. Our spiking circuit models were constrained by empirical data at the neuronal and sub-neuronal level, and can make predictions for cognitive functions at the behavioral level. We also leveraged mathematical models and dynamical system analyses to study the attractor dynamics of the neural circuits, and provide abstract insights to the circuit model results. In particular, we studied how circuit structures and motifs contribute to the computation process. We focused on inhibitory neurons, which suppress other neurons, and explored two of their potential roles across the studied cognitive functions: to maintain the neural circuit in the dynamical regime appropriate for neural computation, and to modulate cognitive processes based on top-down demands. We also studied how distinct perturbations to the circuit models may disrupt their computation and impair cognitive behaviors, providing insights to neuropsychiatric disorders.”

Lam will join MIT as a postdoctoral associate.

Thesis Abstract: “Cognitive behaviors fundamentally arise from the interactions of numerous neurons in the brain. However, while neuronal properties are well-characterized, how an ensemble of interconnected neurons acts is generally not apparent from the single-neuron dynamics. Computation in specific circuits of neuronal populations is known to reflect key variables in core cognitive functions, such as decision making, although the underlying mechanisms are not fully understood. There thus are explanatory gaps between the knowledge at the levels of single neurons, neural circuits, and behavior.

Microcircuit-level modelling, which describes the dynamics of populations of biophysically-realistic model neurons, is a useful tool to bridge the aforementioned gaps. Constrained by neuronal dynamic and connectivity pattern, microcircuit model can demonstrate potential underlying mechanisms of neural computation relevant to cognitive function. Proposed mechanisms can generate dissociable predictions that can be directly tested in experiments.

This dissertation entails multiple studies concerning the underlying neural mechanisms of core cognitive functions, including decision making, working memory, and attention. The studies primarily utilize computational modelling of microcircuits, and heavily collaborate with experimentalists for constraining and testing the models. Insights from theoretical models and dynamical systems analyses are also leveraged to aid in the interpretation of computational model results.
Inhibitory neurons, which suppress the activity of other neurons, are crucial components of neural microcircuit. They maintain the microcircuit in the dynamical regime appropriate for neural computation, and can serve as focal “control knobs” to modulate cognitive processes based on demand. The dissertation explores both roles of inhibitory neurons. In particular, the balance between excitation and inhibition is a critical regime for cognitive computation, and its disruption is linked to deficit in cognitive functions induced across neuropsychiatric disorders. To understand how disruptions of excitation-inhibition balance result in cognitive deficit, we study circuit dynamics and computation under excessive or insufficient inhibition for several core cognitive functions. While disruptions in both directions can impair cognitive performance, they distinctly alter circuit dynamics, allowing specific tasks to dissociate the direction of disruption, especially in the context of neuropsychiatric disorders and perturbation experiments.
This thesis aims to contribute to our understanding of the neural mechanisms underlying various cognitive behaviors, especially on the regulatory roles of inhibitory neurons on circuit computation, and on the effects of physiological disruptions in neuropsychiatric disorders.