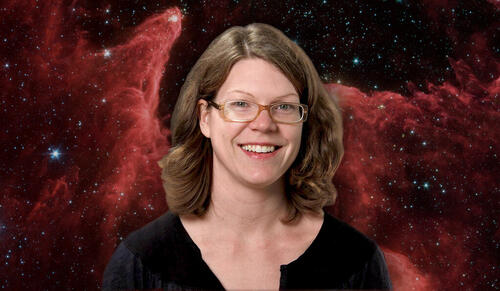 Laura Newburgh, assistant professor in Physics and a member of Yale’s Wright Lab, and her collaborators at the Canadian Hydrogen Intensity Mapping Experiment (CHIME) are winners of the 2022 Lancelot M. Berkeley – New York Community Trust Prize for Meritorious Work in Astronomy for breakthroughs in the understanding of a mysterious phenomenon known as fast radio bursts.

The American Astronomical Society (AAS) has presented the Berkeley Prize since 2011. The prize includes a monetary award and an invitation to give the closing plenary lecture at the AAS winter meeting scheduled for January 9-13, 2022.

The CHIME team is being honored for its dramatic progress on the understanding of fast radio bursts (FRB) — brief and powerful flashes of radio waves with enigmatic origins — using observations from the CHIME radio telescope in British Columbia. Though FRBs were discovered in 2007, until recently, only about 140 of them had been found. During the past year, CHIME has presented detections that more than quadruple that number.

Researchers believe the high-intensity nature of FRBs indicates they are connected to highly energetic astrophysical events in their galaxy of origin, such as neutron stars or black holes, which are of great interest to scientists.

“CHIME has provided us with a new view of the sky,” said Newburgh, an assistant professor of physics. “It was designed to map the entire sky every day for a variety of science goals. This revolutionized our ability to study transient events, in particular fast radio bursts.”

Newburgh said work performed at Wright Lab was critical in estimating the brightness of one FRB event that allowed CHIME to link a fast radio burst to at least one source: a rotating neutron star with a strong magnetic field.

Newburgh further described that, in order to associate the FRB with a celestial source (in this case, the magnetar), the measured brightness must be estimated, which requires knowledge of the CHIME telescope beam (in other words, how the telescope “sees” the sky).

The CHIME beams have been observed using a holographic technique that Newburgh began as a postdoc at Toronto University (results from the first use of this technique were published in SPIE), and which is continuing under Wright Lab graduate student Alex Reda here at Yale. Newburgh contributed to the section describing the beam measurement technique in a Nature paper about the magnetar.

In addition, the FRB was measured with the 10m dish in Algonquin Park in Ontario, CA, which was used to confirm the rotation measure (how much the polarization of the light has changed as it traverses the ionized material between the source and the earth).  Newburgh developed the analog instrumentation deployed on the focus of that telescope during her time as a postdoc in Toronto.

“As someone who has spent nearly a decade working on the experiment, this is a wonderful appreciation of that work,” Newburgh said. “It is also a hopeful note for the future, since we haven’t even scratched the surface of what the CHIME data is capable of.”

The CHIME project is co-led by the University of British Columbia, McGill University, the University of Toronto, and is hosted at the Dominion Radio Astrophysical Observatory by the National Research Council of Canada, with collaborating institutions across North America.

This article has been adapted from a Yale News release by Jim Shelton.