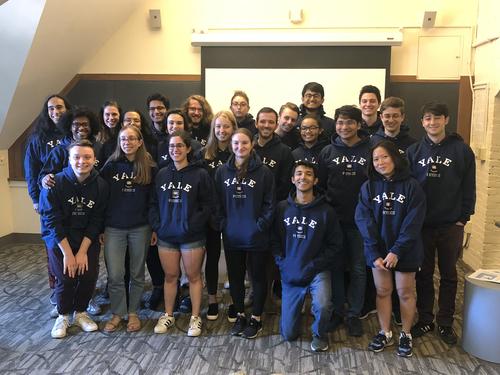 The Yale University Physics Department officially welcomed 23 newly-declared undergraduate majors in physics, physics (intensive), physics and geosciences, physics and philosophy, and mathematics and physics in its annual hoodie ceremony on Friday, September 20, 2019.  Department Chair Karsten Heeger presented each of the students with their own Yale Physics hooded sweatshirt, or “hoodie.”  All faculty and students present were then invited to a casual reception organized by Women in Physics, the Society of Physics Students and the Physics Department.

The annual hoodie ceremony began in 2014 in order to acknowledge students who have formally declared as a physics major.