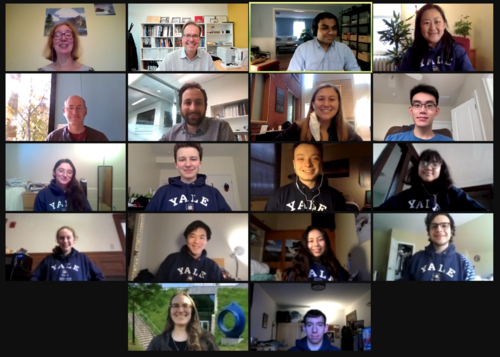 The Yale University Physics Department officially welcomed 47 newly-declared undergraduate majors in physics, physics (intensive), physics and geosciences, physics and philosophy, and mathematics and physics in its annual hoodie ceremony on Friday, November 6, 2020. Department Chair Karsten Heeger made some introductory remarks and then turned the ceremony over to Nikhil Padmanabhan as the Director of Undergraduate Studies. In addition, welcome statements were made by Sarah Demers (faculty advisor for WiP), Reina Maruyama (former DUS and faculty advisor for SPS), as well as faculty members Jack Harris, Helen Caines, and David Moore. Prof. Padmanabhan then read the names of all the majors (including a handful of seniors who were not present at last year’s ceremony). In lieu of being presented with their own Yale Physics hooded sweatshirt, or “hoodie” at the ceremony, several of the students were able to pick up their hoodie ahead of time and wore them during the ceremony.

The annual hoodie ceremony began in 2014 in order to acknowledge students who have formally declared as a physics major.