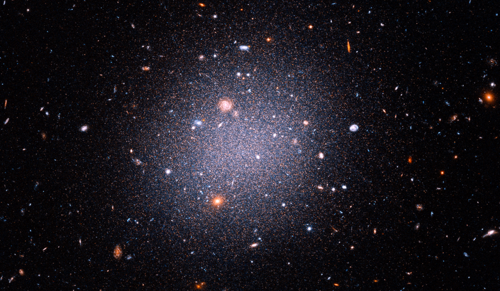 In Yale News (June 17, 2021), “Going the distance to confirm a galaxy with almost no dark matter”

Three years ago, a team of astronomers led by Yale’s Pieter van Dokkum surprised the scientific community with the discovery of a far-off galaxy that contained little or no dark matter.

The discovery, made using NASA’s Hubble Space Telescope, had the potential to upend well-established theories about how galaxies form and evolve. That is because dark matter — the invisible scaffolding that accounts for most of the universe’s mass — is considered essential for creating and shaping galaxies.

But how could a galaxy exist with almost no dark matter? Some astronomers speculated the finding was incorrect. Specifically, they questioned the accuracy of distance measurements from Earth to NGC 1052-DF2 — the galaxy with no dark matter.