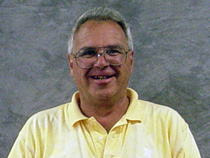 “Professor Casten has many accomplishments and awards including Fellowships in the American Physical Society and the American Association for the Advancement of Science. He has recently been awarded the prestigious Tom W. Bonner prize in Nuclear Physics and received the APS Division of Nuclear Physics Mentoring Award. Professor Caster is very active in the nuclear physics community. He is the present Chair of the FRIB Science Advisory Committee and the past Chair of the Nuclear Science Advisory Committee (NSAC). He has served on all four Long Range Plan Panels since 1989 (1989, 1995, 2001,2007). He was Director of the Wright Nuclear Structure Laboratory form 1995-2008. Dr. Casten will work at LANSCE to develop new research ideas and possible directions for basic research in nuclear structure. Specific areas of interest include exotic nuclei, the mechanisms for the emergence of collectivity in nuclei, the evolution of shell structure, the stability of the heaviest nuclei, recognizing and interpreting the simple and regular patterns that complex nuclei exhibit, order and chaos in nuclei, the relationship  between mass (binding) and structure, and new signatures of structure and its changes with N and Z.”