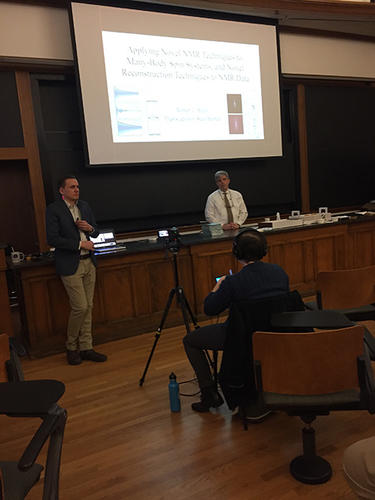 Blum explained “My thesis focuses on two different topics that at first glance seem unconnected, but which both developed from my lab’s interest in using the tools of NMR in new ways to investigate unusual systems.

First, I describe our work making the first NMR observations of discrete time crystal signatures. A discrete time crystal (DTC) is a many-body quantum state where a driven system exhibits discrete time translational symmetry breaking. When we began our work, most DTC theories used many-body localization, which requires a disordered system to produce the state. Instead, our lab detected DTC signatures in an ordered spatial crystal that look very similar to signatures from disordered systems.
My second topic is, essentially, how to do experiments faster by getting more information from less data. In particular, I take a deep dive into the workings of a spectral reconstruction method called DiffMap that my lab previously developed to speed up data acquisition both for 3D MRI of solids and for 2D NMR. Focusing on the 2D case, I show how reconstruction errors arise and how to predict which sampling fractions are particularly susceptible to them. This allows us to determine the lower limit on the number of samples required to accurately reconstruct a given feature in a given spectrum. I also discuss an extension of DiffMap we devised called coDiffMap. For the particular case of pseudo-3D NMR experiments, coDiffMap allows us to greatly improve reconstruction of the entire spectrum at once.”
Blum will continue at Yale as a Postdoctoral Associate.
Thesis abstract: This experimental thesis focuses on two distinct themes: developing NMR techniques to probe many-body spin systems, and extracting the maximum amount of information from the minimum amount of data. For the first theme, I describe the first NMR observations of discrete time crystal signatures. A discrete time crystal (DTC) is a many-body quantum state where a driven system exhibits discrete time translational symmetry breaking. A surprising aspect of our DTC signatures is that they were detected in an ordered spatial crystal of ammonium dihydrogen phosphate, and yet the signatures look quite similar to those detected in very different systems with more disorder. We use a novel DTC echo experiment to probe the coherence of the driven system. Finally, we show that interactions during the pulse of the DTC sequence contribute to the decay of the signal, complicating attempts to measure the intrinsic lifetime of the DTC. For the second theme, I discuss the acceleration of NMR experiments via non-uniform sampling and spectral reconstruction methods. Our lab previously developed a reconstruction method (called DiffMap) that we successfully applied to 2D NMR spectra. Here, we develop an in-depth understanding of the action of the DiffMap algorithm, identifying the factors that cause reconstruction errors and how to predict them. This improved understanding allows us to formulate a bottom-up approach to finding the sparsest sampling required to accurately reconstruct individual spectral features with DiffMap. I also describe the development of the coDiffMap reconstruction method, which modifies and extends DiffMap for the case of pseudo-3D NMR experiments, using the correlations across the 2D slices of the data set as additional information. Incorporating this information allows entire spectra (not just individual features) to be reconstructed accurately with very sparse sampling. I particularly focus on describing our efforts to understand coDiffMap’s error sources and reconstruction behavior in an analogous way to how we analyze DiffMap. For both DiffMap and coDiffMap, we were able to push the amount of sparsely-sampled data required for an accurate reconstruction all the way down to a level comparable to the “information content” of the original, dense spectrum. 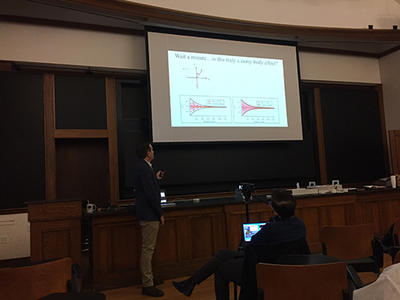