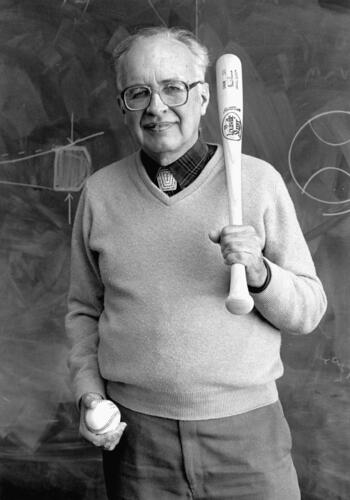 by Charles Baltay and Steven Girvin

Robert Kemp Adair, the Sterling professor Emeritus of physics at Yale University, passed away on September 28, 2020 in Hamden, Connecticut at age 96. He was a distinguished, world renowned pioneer in particle physics; but possibly even more remarkable as a warm, all-round human being; a beloved and highly respected teacher, mentor, colleague and supervisor. He had a delightful sense of humor, with a constant laugh that could be heard far down the hall. But if you were ever in need of serious advice, he was the person to seek out.  He was a strong supporter of women in science; training a number of women Ph.D. students and proud of his wife Eleanor Adair’s career as an environmental physiologist and Fellow of the John B. Pierce Foundation, and later a senior scientist with the Air Force.

Bob was born on August 14, 1924 in Fort Wayne, Indiana. He could easily be recognized by a permanently crooked right elbow from an injury he received as a veteran of the European theatre of operations in World War II, for which he was awarded the Bronze Star and the Purple Heart medals. He was an undergraduate at the University of Wisconsin, and earned his Ph.D. in physics at the University of Wisconsin in 1951. He was employed as a scientist at Brookhaven National Laboratory from his graduation in 1951 until 1959, at which time he was appointed to a faculty position in the physics department at Yale University. There he rose rapidly through the faculty ranks to full professor, and retired as the Sterling professor Emeritus of physics in 1994. In between, he served as chair of the Physics Department and later as director of the Division of the Physical Sciences at Yale. During those years, he also served a term as the associate director of High Energy and Nuclear Physics at Brookhaven National Laboratory and as the senior editor of the prestigious journal Physical Review Letters.

Bob was an internationally recognized and respected pioneer in the early days of the growing field first known as high energy nuclear physics; later coming into its present name of elementary particle physics. The four basic forces in nature were then known as gravity, electromagnetism, the strong nuclear force, and the weak interaction. Bob was one of the early experts in the experimental study of the weak interactions. He carried out a large number of rare K meson decay measurements, which were the primary source of information on weak interactions at that time. He helped establish the delta I equal ½ rule and the delta S less than 2 rule that governed the weak interactions, and which then led to the basic understanding of the Quark model in the 1960’s (here I stands for the Isotopic spin and S is the strangeness quantum number). Bob was also a leading inventor of techniques to measure properties of the then recently discovered particles carrying the strangeness quantum number, such as, for example, the Adair Method of measuring the spin of the Lambda hyperon. In recognition of this, the Adair Angle was named after Bob.

Bob Adair’s eminence as a physicist was recognized by numerous honors. He was elected to the National Academy of Sciences in 1976, and served as the chairman of the physics section from 1986 to 1989. He also was appointed chairman of the National Academies Class of Physical Sciences in 1991, and became a fellow of the American Academy of Arts and Sciences in 1997. Bob received the DeVane Medal for excellence in teaching at Yale. Many of us received an initiation in particle physics from Bob’s famous “Particle Physics” course. He made a permanent impression on us by using intricate tinker toy models to illustrate complicated particle interactions.

Another feature of Bob was the breadth of his range of interests and expertise. Most of his experiments were carried out using the Alternating Gradient Synchrotron at Brookhaven; many of them using the 12-inch liquid hydrogen bubble chamber that he pioneered. In addition, he wrote many articles suggesting interesting new directions for particle physics using contemplated future facilities. He used to joke that, in spite of all his accomplishments, he regarded most highly his appointment by A. Bartlett Giamatti, formerly the President of Yale University, but later President of the National League, and then Commissioner of Major League, as the “Physicist to the National League.” His crowning achievement, he used to say, was his book titled The Physics of Baseball.  A glimpse into Bob’s character can be found in the first paragraph of the preface to this book, in which he states that “Physicist to the National League” was “a title that absolutely charmed the ten-year-old boy that I hope will always be a part of me.”

Other books to his credit are The Great Design: Particles, Fields and Creation, and the Physics of Strange Particles, written in collaboration with Earle Fowler. Later, after he retired from Yale, he wrote a series of expert articles on the effects of low-level electromagnetic radiation on biological systems, such as humans, for example.  He also served on the committee of the American Physical Society (APS) established to investigate the APS Statement on Global Warming in 2007.

Bob lived in the Thornton Wilder house, built in 1929 using the proceeds from the Pulitzer Prize that Wilder won for his 1927 best-selling novel, The Bridge of San Luis Rey.  Bob composed his own books in the same study where Wilder wrote the Pulitzer Prize-winning play Our Town in 1938.

Bob was a kind and wise soul whose scientific reach spanned a wide range from elementary particles with strange quantum numbers to baseballs with strange trajectories.  His legacy includes both novel ideas and countless students he trained and mentored so well.

His obituary, as published in the New Haven Register, can be found here.

The above article was published in the January 26, 2021 edition of the “Proceedings of the National Academy of Sciences of the United States of America” (PNAS).