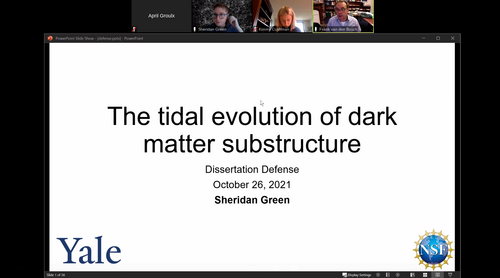 Green states “Dark matter subhaloes currently offer one of our best opportunities to constrain the nature of dark matter. The primary way that we make predictions of subhalo statistics is via cosmological N-body simulations. These simulations have been an incredible tool for science, but they suffer from limitations due to their discrete nature. During my time at Yale, I helped develop SatGen (led by Fangzhou Jiang), which is a modeling framework that is complementary to simulations that allows us to make independent predictions of subhalo statistics. We used this model to demonstrate that cosmological simulations underpredict the abundance of subhaloes by ~10-20%, which is attributed to the artificial destruction of subhaloes that arises due to runaway instabilities triggered by discreteness noise. This result has important implications for constraints placed on the particle properties of dark matter made by indirect detection experiments. We also used SatGen to help explain that the cause of the tension between the simulated abundance of subhaloes near the halo center and observed abundance of satellite galaxies near the halo center arises due to the finite mass resolution of the simulations.”

On his future plans “I’m heading to work in trading, where I’ll be joining Susquehanna International Group as a Quantitative Strategist in a couple of weeks.”

Thesis Abstract: Accurately predicting the abundance and structural evolution of dark matter subhaloes is crucial for understanding galaxy formation, large-scale structure, and constraining the nature of dark matter. Due to the nonlinear nature of subhalo evolution, cosmological N-body simulations remain its primary method of investigation. Subhaloes in such simulations have recently been shown to still be heavily impacted by artificial disruption, diminishing the information content (at small scales) of the simulations and all derivative semi-analytical models calibrated against them.

In this dissertation, we build an improved semi-analytical model of dark matter substructure evolution and use it to assess various limitations of current-generation cosmological simulations. This work begins with the development of a state-of-the-art model of the mass evolution of individual subhaloes, which captures the joint effects of tidal heating and stripping on the subhalo structure. We incorporate this model into our recently released SatGen framework for studying the build-up and evolution of populations of dark matter subhaloes. We use SatGen to generate independent predictions for key quantities in small-scale cosmology, such as the evolved subhalo mass function (SHMF) and radial profiles. By comparing our results to cosmological simulations, we show that artificial disruption affects the SHMF at the 10-20 percent level, ameliorating previous concerns that it may suppress it by as much as a factor of two. We show that the resolution limit of N-body simulations, rather than artificial disruption, is the primary cause of radial biases in the subhalo number density found in dark matter-only simulations.
Simulations have shown that the formation of a central disc can drastically reduce the abundance of substructure compared to a dark matter-only simulation, which has been attributed to enhanced destruction of substructure due to disc shocking. We use SatGen to examine the impact of discs on the substructure of Milky Way-like haloes with unprecedented statistical power. We find that the overall subhalo abundance is relatively insensitive to properties of the disc aside from its total mass. Furthermore, we show that the halo-to-halo variance in subhalo abundance dominates the mean impact of a Milky Way-like disc. We argue that the disc mainly drives excess mass loss for subhaloes with small pericentric radii and that the impact of disc shocking is negligible.