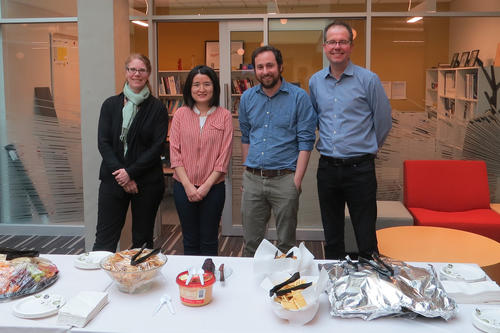 Xia explained “Neutrinos are one of the most fascinating fundamental particles comprising our world. Trillions of neutrinos pass through our bodies every second without our noticing them, as they rarely interact with each other or other particles. There remain a number of unanswered questions about these stealthy particles —  Why are neutrinos lighter than charged particles? Are neutrinos their own anti-particles? My research investigates basic properties of neutrinos through searching for a hypothetical process called “neutrinoless double-beta decay” (0vbb). If this decay process exists, it would provide clues to the neutrino mass generation mechanism, and would be smoking gun for new physics. Through minimizing the level of radioactivity of materials used for constructing the detector, as well as maximally shielding radiation from external sources, our detector successfully placed a lower limit on the 0vbb half-life of Xe-136 — 3.5*10^25 years. The next generation experiment is currently underway, which will be sensitive to extremely rare 0vbb signals if they occur with a half-life of ~10^28 years.”

Thesis Abstract:  Liquid xenon (LXe) is employed in a number of current and future detectors for rare event searches. This work presents the latest results from the EXO-200 experiment, which searched for neutrinoless double beta decay (0$\nu\beta\beta$) in $^{136}$Xe between 2011 and 2018. With upgraded hardware, increased exposure and analysis improvements, the detector resolution, sensitivity and final data limit were also improved over time.

Taking advantage of a single-phase, large detector with good purity and well-calibrated energy response, measurements of the absolute scintillation and ionization yields generated by MeV energy gamma sources over a range of electric fields was performed in EXO-200 and are presented in this thesis. These measurements are useful for simulating the performance of future 0$\nu\beta\beta$ detectors employing LXe, such as nEXO, which is a next generation 0$\nu\beta\beta$ experiment using $^{136}$Xe aiming to reach a half-life sensitivity $\sim10^{28}$ years. The development of high-bandwidth digital cable prototypes with sufficiently low radioactivity for use in nEXO is described in the end.