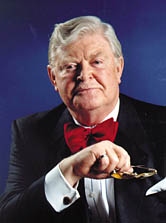 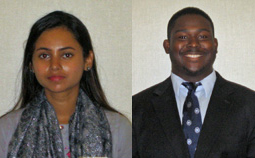 It is a pleasure to announce that Tonima Ananna and Charles Brown have been named co-recipients of the 2017 D. Allan Bromley Graduate Fellowship in Physics.

Tonima Ananna is a fourth-year graduate student in the Physics Department whose thesis research addresses the growth of supermassive black holes over cosmic time. She is in the process of completing the determination of redshifts (distances) of quasars in a large X-ray survey and will soon be finishing a paper on this work. Professor Meg Urry is her thesis advisor.

Tonima has also focused on various outreach activities that work to support women in STEM in her country of origin Bangladesh. She is working with an organization called Wi-STEM, which encourages high school and undergraduate women in Bangladesh to join and remain in the sciences. She has collaborated to create a mentorship program, and personally took on four mentees in Dhaka. She has a long-term goal of developing an astrophysics program in Bangladesh, where at present there is none. Tonima received a Leigh Paige Award at Yale in 2013.

Charles Brown is a fourth-year graduate student in Physics investigating nonlinear phenomena in both the electromagnetics and the mechanics of optomechanical devices and systems. This allows access to the study of quantum mechanical effects in the optical and mechanical domains. Professor Jack Harris is his thesis advisor.

Charles has been very public-service-oriented and has made presentations at various workshops and public science events regarding science for the public. Charles is president and co-founder of the Yale League of Black Scientists, whose mission is to facilitate public science awareness and to encourage and support people of all ethnic and socioeconomic backgrounds to pursue science and advanced science degrees. Charles is an NSF Fellow, received a Leigh Paige Award at Yale in 2013, and serves as a student representative to the National Society of Black Physicists.

The selection committee faced a difficult choice this year, as there is no lack of highly-qualified nominees. Dr. Bromley would be pleased with the work of our nominees and that of the awardees Yale Physics graduate students are making a difference at Yale, nationally and internationally in so many ways.

The Fellowship is awarded annually to graduate students in Physics who have advanced to candidacy in the Ph.D. program, particularly those “who exhibit a broader interest than just physics, including, but not limited to, science and public policy, engineering, and applied science.” Candidates are nominated by the Physics faculty and selected by the D. Allan Bromley Professor of Physics (currently John Harris) and the Director of Graduate Studies (currently Sean Barrett). The indenture goes on to say, “In this way, the recipients will reflect and celebrate Dr. Bromley’s distinguished and honorable persona in the exceptional scope, standing, talent, and character of his distinguished personal, public, and academic life.”