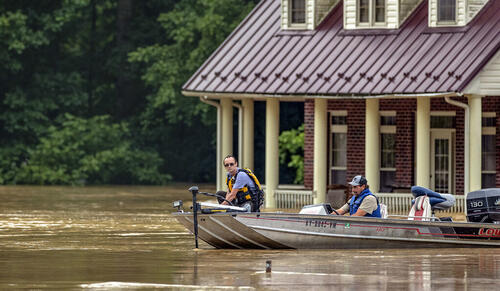 Extra waves may be great for surfers, but they can lead to tumultuous weather when they start showing up in jet streams.

That’s because jet streams — blowing ribbons of wind that encircle the earth — play a critical role in the location and severity of weather events, such as the recent floods that devastated Kentucky. Even a slight change in the “waviness” of the polar or the subtropical jet stream can lead to dramatic weather changes in mid-latitude regions, from northern California to Moscow.

Recent decades have seen just such an increase in jet stream waves, leading scientists to pose the question: Are these windy wanderings being caused by a warming planet?

A noted Yale scientist and a team of international colleagues say yes — and in a new study, published in the journal Proceedings of the National Academy of Sciences, they offer a theory to prove it.

“As the planet warms, we predict that the land-ocean contrast of atmospheric heating enhances the meandering in the jet stream and that implies more of these extreme weather events, such as what we have experienced this summer in Kentucky,” said John Wettlaufer, the A.M. Bateman Professor of Geophysics, Mathematics, and Physics at Yale, the co-corresponding author for the study.

This article is excerpted from the Yale News article of September 12, 2022 by Jim Shelton. Please see below for the full article.