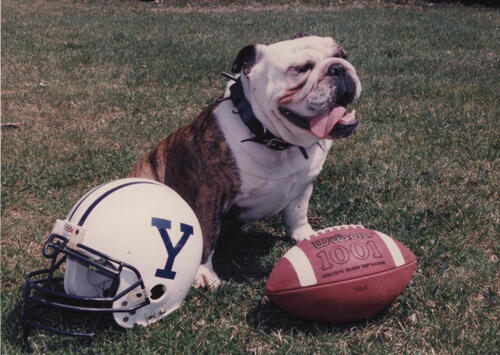 Steve Lamoreaux, professor of physics, and member of Yale’s Wright Lab, explained the physics of football for a segment for ESPN’s NFL Countdown that aired on November 21, 2021.  The clip can be viewed here and below.

Lamoreaux said that he enjoyed speaking with the ESPN crew, and that, due to the nature of the clip being short, some of the things that they had discussed about the physics of football were cut.  The continuation of his explanation is included, below.  Lamoreaux said:

The play I discussed in the ESPN clip can be seen in detail in an animation on this Twitter thread here.  Next Gen Stats, who posted this animation, also summarized the play as follows: 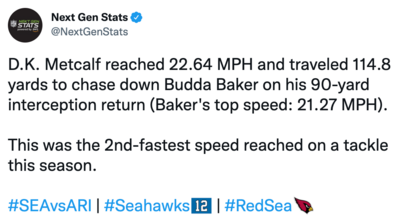 DK Metcalf of the Seahawks had to make up 4 yards, not 10. So he had 60 yards compared to Budda Baker’s 56 yards, to the point of trajectory intersection, and then had to follow for awhile. Once Metcalf was far downfield, the distance that needed to be made up was relatively insensitive to the intersection point, it’s just 4 yards.

During the chasedown, Metcalf’s average speed was 20 mph (max was 22.6) and Baker’s was 19 mph.  These speeds are better than the 20-yard-dash times because they were already running when the timing started.

As an aside, Usain Bolt’s 100 meter average speed is 22.36 mph, top speed is 27 mph-  just to compare the speeds above to the world’s fastest man of record in a comparable event, and recall that the football players are running with all their gear and cleats, etc.  Bolt’s average speed is hampered by his relative slow reaction time to the start signal.

Because Baker was carrying the football, his running speed suffered slightly; not so much because of the weight of the ball, but because of restricted arm movement.  “Think of trying to run with your hands tied behind your back; that is an extreme case, but any restriction on arm movement will have an impact on speed.

“Metcalf was running an average of 20 mph which is 10 yards/sec.”

“In 8 sec,  Baker covered 76 yards, which takes him to near the opposite 10 yard line when he was down (it was the 8 yard line, these numbers are approximate).  One extra second would have carried Baker another 9.5 yards, and into the endzone for a score.”

“I call Metcalf a genius because of this play.  These sort of chasedowns are not especially rare, but this one was something special.”

Some interesting features are shown in the NFL graphic:

Imagine running in a straight line down an open field, and your dog sees you from afar and starts running toward you to catch up.  The dog’s trajectory is alway aimed at you, so the path is not a straight line.  This is called the pursuit trajectory, and if the pursuer is slower than the pursued, although it is not impossible to catch up, the range of solutions are limited.

Considerable distance could be saved if the dog thought to plan a straight line to intersect your path farther up.