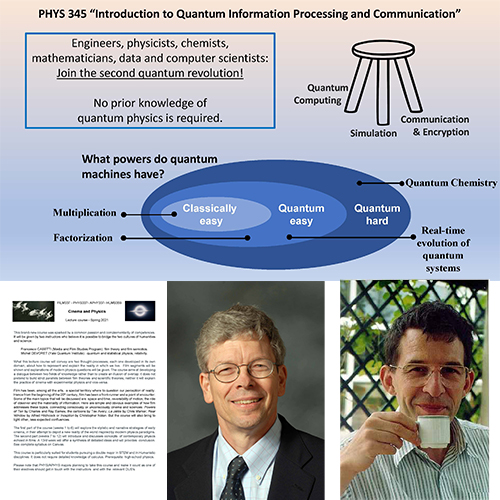 In addition to these new courses, we will be offering both PHYS 180 (Spring 2021) and PHYS 181 (Fall 2021) out of sequence this year, in parallel to the regular sequence, in order to provide those who took a leave of absence in the Fall term with the opportunity to take these courses in an appropriate sequence for their own curriculum needs . 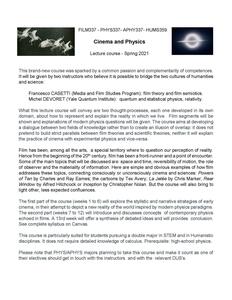 Description: Taking up the parallelism between the evolution of art, science and technology at the turn of 19th and 20th centuries, this course explores the bidirectional relationship between the art of moving pictures and the science of fundamental physical laws. Such a dual perspective, based on a selection of particularly telling movies, presents some of the crucial ideas that science and art dealt with in the last hundred years. Among these topics, we address questions tied to the nature of time and space, the relativity of motion, the role of the observer in physical phenomena, the coexistence of the visible and invisible, the possible existence of parallel universes, as well as concepts like light and matter, fields and waves, chaos and order, uncertainty and chance, teleportation and quantum entanglement, boundlessness and infinity, space curvature and gravity. A radical question also accompanies us throughout the course: Can the humanistic and scientific forms of thinking converge and merge? Can they help each other to become more aware of themselves? And finally, can the rigorous exploration of the world, the language of poets, the pleasure of the performance, the magic of discoveries, productively work together? The first part of the course (weeks 1 to 7) explores the stylistic and narrative strategies of early cinema in their attempt to depict a new reality of the world. The second part of the course (weeks 8 to 13) introduces and discusses ideas of contemporary physics that have found an echo in films. This course does not require detailed knowledge of calculus.

For Physics majors, please check with the instructors of the course and with the Director of Undergraduate Studies Nikhil Padmanabhan about using this course as an advanced elective. 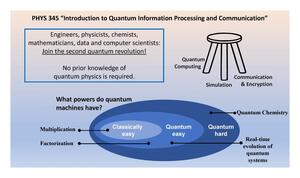 Description: This course is intended for undergraduate physics, chemistry, engineering, computer science, statistics and data science, and mathematics majors seeking an introduction to quantum information science.  There is now a second quantum revolution underway and a world-wide race to build powerful new types of computers based on quantum principles, and to develop new techniques for encrypted communication whose security is guaranteed by the laws of quantum mechanics. The approach of this course to these topics will strip away much of the traditional physics details to focus on the information content of quantum systems, the nature of measurement, and why the true randomness of certain measurement results can be a feature rather than a bug. We will learn what it means for a quantum bit (‘qubit’) to be simultaneously 0 and 1 (in some sense).   We will learn about quantum entanglement and the associated ‘spooky action at a distance’ that convinced Einstein that the quantum theory must be wrong.  Ironically, this bizarre effect is now used on a daily basis to prove that quantum mechanics is indeed correct and used as a routine engineering test to make sure that quantum computers are working properly and are truly quantum.  Specific topics to be covered in this course include: the mathematical representation of quantum states as complex vectors, the superposition principle, entanglement and Bell inequalities, quantum gates and algorithms for quantum computers, quantum error correction, dense coding, teleportation, and secure quantum communication.  In this course you will learn enough of the basics to be able to do problem sets based on programming and operating publicly-accessible cloud-based quantum computers.   See for example: https://www.ibm.com/quantum-computing/.