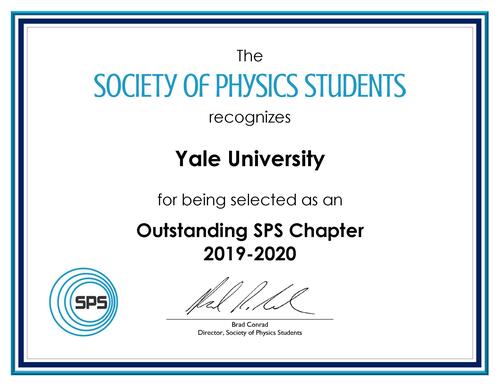 The Yale University chapter of the Society of Physics Students (SPS) has won an Outstanding Chapter Award from the SPS National Office. This is the first time the chapter has been recognized for its excellence as a top-tier student-led physical sciences organization, a designation given to fewer than 10 percent of all SPS chapters at colleges and universities in the United States and internationally.

The Society of Physics Students (SPS) is a professional association designed for students and membership is open to anyone interested in physics and related fields. SPS operates within the American Institute of Physics (AIP), an umbrella organization for professional physical science societies.

The SPS chapter at Yale University is advised by Associate Professor Nikhil Padmanabhan and is led by student officers. The 2020-2021 officers are:

“This recognition is a high honor for Yale SPS. This year, in addition to organizing our usual club activities, the board has worked terrifically hard to increase participation in national and regional SPS programs, so it’s great to receive recognition from the national organization. We’ve recently established a Sigma Pi Sigma chapter and revived the SPS outreach program, so I think there’s a lot of potential for Yale SPS to continue growing a vibrant undergraduate physics community,” said Laura Zhou.

The Yale SPS chapter was recognized as outstanding for community building efforts, involvement in official SPS programs, and its academic and professional initiatives. In the 2019-2020 year, members were awarded SPS grants to attend AIP PhysCon. For the annual Schultz and Tinsley Senior Prize Lectures, SPS hosted Duncane Haldane and Wolfgang Ketterle, respectively. During the fall semester, the chapter organized informational workshops, panel discussions with Yale alumni, and a peer mentorship program.