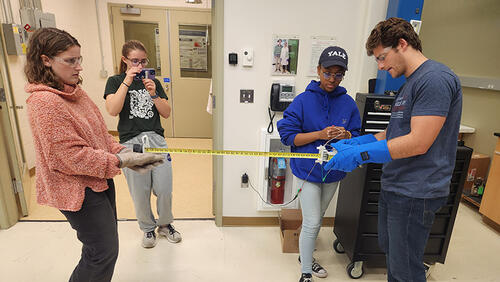 Last Wednesday, a team of four undergraduates, Grady Morrisey, the co-leader of the CubeSat team (along with Elijah Bakaleynik), Troi Slade, Kylyn Smith, and Matilda Vary came to Wright Lab to do a “cold test” of their satellite,  with the assistance of Wright Lab research development technician Frank Lopez.

Morrisey explained, “BLAST employs a custom Gravity Gradient Boom (GGB) for passive (non power-consuming) attitude control and stabilization. Once the satellite is detumbled in orbit using active magnetorquers, we will deploy the Gravity Gradient Boom, which consists of a tape measure moved by a sprocket. The tape measure has a tip mass at the end which will move the center of mass of the satellite away from its center of gravity, inducing an effect called tidal locking. This effect will stabilize the satellite’s orientation in orbit without expending power.”

He continued, “the GGB has several moving parts, and so the team needed to do thermal testing of the instrument to validate that it would work in the harsh environment of space. We came to Wright Lab to do cold testing, where we brought the instrument down to -40C and validated its functionality. The results were very promising.“

The CubeSat team was also in resdidence at Wright Lab in Spring 2019, under the mentorship of associate director for instrumentation and education James Nikkel.  The team used one of Wright Lab’s clean rooms to conduct tests on launch-ready components, such as the altitude control systems, and for assembly of the satellite. For more information on their 2019 work at Wright Lab, please see this article here.

BLAST is a CubeSat, a class of research spacecraft (a.k.a. nanosatellites) named for their cube shape. BLAST will be Yale’s first satellite constructed by undergraduate students.  The YUAA CubeSat team plans to complete construction, flight software development, and validation testing of the CubeSat during the 2022-23 academic year, prior to handover to NASA in Spring 2023 for launch as an auxiliary payload on a rocket planned for an upcoming launch.

Once in Low Earth Orbit, BLAST will conduct measurements of cosmic rays before they enter Earth’s atmosphere. Cosmic rays are high-energy streams of particles, mostly of extrasolar origin, which radiate through space. Upon contact with Earth’s atmosphere, many of these rays decay into secondary showers consisting of lighter particles. Accordingly, the range of cosmic ray research we can conduct within Earth’s atmosphere is limited by the statistical interaction between the atmosphere and the cosmic rays. The identification of cosmic ray sources is an active area of research, and the energy distribution of the highest-energy particles at the largest scales has ramifications for cosmology and the theory of particles. The team seeks to identify and make measurements of the energy of particles in these showers, to contribute to the ongoing collection of data about these rays.