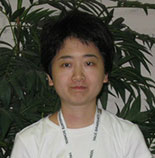 Zhu explained, “The experiment that I take part in is about making SrF molecules very cold. Currently, the lowest temperatures are on the order of 5 microKelvins. We hope to do better by adding ultracold atoms that are colder than the molecules to the mix. The temperature of SrF molecules would be reduced if, from the viewpoint of an individual molecule, it passes some of its momentum and kinetic energy to atoms via collisions. This thermalization process is prevalence in physics and daily life, e.g., coffee gets cold. In the case of cooling molecules, if this works out, molecules get ultracold (nanoKelvin temperatures). In practice, we need a reservoir of ultracold atoms and a trap that holds everyone together while thermalization happens. My work over the years is relevant to both ingredients. My thesis documents these efforts towards co-trapping SrF and Rb. In the experiments with Rb, laser cooling is used as a powerful tool to collect a large number of atoms.”

For the short term Zhu will join the Reina Maruyama group at Yale as a Postdoctoral Associate.

Thesis Abstract: Polar molecules can interact via the anisotropic and long ranged electric dipole-dipole interaction owing to their large permanent electric dipole moments. Being able to study them in the ultracold temperature regime and at high density would allow us to study strongly correlated physics, and expand the toolbox for quantum computation.

In order to reduce the temperature of SrF beyond the sub-Doppler temperature (~10 μK) achieved with laser cooling by polarization gradients, we hope to implement sympathetic cooling of SrF and Rb. Pursuing this direction requires advancements in experimental capabilities. This thesis describes the experimental efforts towards co-trapping SrF and Rb, which is the starting point of studies atom-molecule collilsions in the ultracold temperature regime. The thesis reports on some technical aspects of conservative trapping: a high-power circuit was developed to facilitate current switching in the context of magnetic quadrupole traps, and depths of optical dipole traps were estimated in anticipation of complexities due to a strongly state-dependent trapping potential. The thesis also details the construction and performance of an apparatus for laser cooling and trapping Rb. The apparatus consists of a 2D MOT that functions as a high-flux beam source of Rb, and an RF MOT. The 2D MOT produces a flux on the order of 109 atoms/s. With 500-ms loading, the RF MOT is able to collect ~109 atoms at temperature ~1 mK. Compared to the molecule number typical in a SrF MOT, the atome number in the Rb RF MOT is 104 higher, suggesting good prospects of observing atom-molecule collisions in a subsequent conservative trap. In addition, we established a comparison between dc and RF MOT of Rb in the same apparatus. We found that in an RF MOT, the number is significantly lower and the temperature significantly higher, while the loading time constant and lifetime are similar to those of a dc MOT. 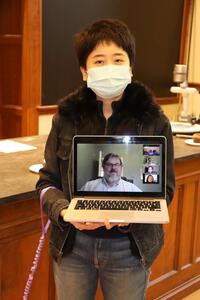 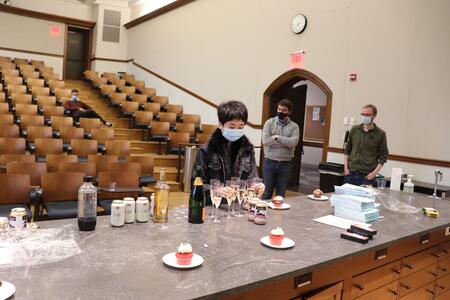