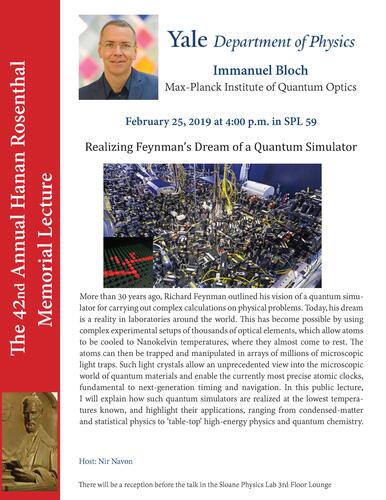 The Yale Physics 42nd Hanan Rosenthal Memorial Lecture was given on February 25, 2019 by Immanuel Bloch of the Max-Planck Institute of Quantum Optics.

More than 30 years ago, Richard Feynman outlined his vision of a quantum simulator for carrying out complex calculations on physical problems. Today, his dream is a reality in laboratories around the world. This has become possible by using complex experimental setups of thousands of optical elements, which allow atoms to be cooled to Nanokelvin temperatures, where they almost come to rest. The atoms can then be trapped and manipulated in arrays of millions of microscopic light traps. Such light crystals allow an unprecedented view into the microscopic world of quantum materials and enable the currently most precise atomic clocks, fundamental to next-generation timing and navigation. In this public lecture, I will explain how such quantum simulators are realized at the lowest temperatures known, and highlight their applications, ranging from condensed-matter and statistical physics to ‘table-top’ high-energy physics and quantum chemistry.

The Hanan Rosenthal Memorial Lecture was established in honor of physicist Hanan Rosenthal, a brilliant graduate student at Columbia University and instructor at Yale. This annual lecture in atomic physics, Rosenthal’s field, is given by a distinguished leader in the field. Originally, the lecture series alternated between Columbia and Yale, which were both significant in Hanan Rosenthal’s career; in recent years, the lecture has been held only at Yale University.