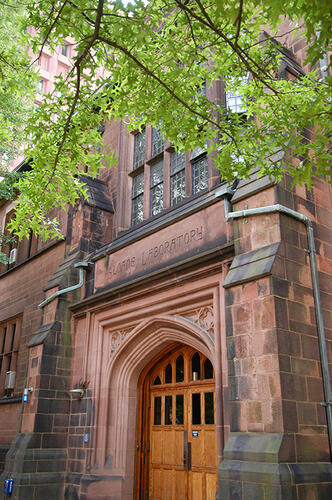 Yale Physics is pleased to welcome 35 new graduate students, including 18 women, 17 men, and 7 students from underrepresented minorities (URM) to our department. This includes 12 international students from 6 countries. This class has already started making history with the  highest percentage of women and URM students of any incoming Yale Physics class.

Stacey Watts, graduate registrar for the department, said “This is the most diverse class we’ve ever had in terms of who applied, were offered, and accepted. The incoming class will be 51% female and 20% URM.”

Simon Mochrie, professor of physics and of applied physics and the Director of Graduate Admissions (DGA) for the Yale Department of Physics said, “The Yale Physics Department is excited and proud to welcome a graduate class with a majority of women for the first time ever and a record percentage of URMs. This historic outcome reflects our outstanding research portfolio, a stellar recruiting effort by all our current students and faculty, and the presence of outstanding role models in the department.”

Bonnie Fleming, professor of physics and the Director of Graduate Studies (DGS) added, ”We are making history here at Yale. This is long overdue progress for our department, our students, and our field.”

Meg Urry, Israel Munson Professor of Physics and former chair of the physics department, who has been a notable advocate throughout her career for increasing the number of women in science  remarked, “This is an historic milestone which reflects the tremendous interest and aptitude that women have for physics.”

Karsten Heeger, professor of physics and chair of the physics department noted,  “I am very pleased to see the result of this year’s admissions process and congratulate and warmly welcome all incoming students. The 2021 class of incoming graduate students reflects the inclusive and diverse community we strive to build in the Yale Physics Department. ”

The 2021 class of incoming students and their research interests include:

Further information on our new graduate students to come.