Yale’s science majors are welcomed into a world of internationally respected faculty who work at the frontiers of contemporary research. As part of Yale’s longstanding tradition, science programs are distinguished by the emphasis placed on undergraduate education: classes are small and the faculty is easily accessible to undergraduates. Science departments actively encourage undergraduates to participate in research alongside faculty or in their own independent research projects, in some cases as early as the freshmen year. Consequently, undergraduates often interact with faculty more as colleagues than as students.

In its on-going program of renovating and remodeling laboratories, Yale has given high priority to the quality of undergraduate teaching laboratories. For example, students taking Physics 205, “Modern Physical Measurement,” perform experiments using a 1 MeV Van de Graaff proton accelerator. As a result of this kind of training and preparation, well over half of Yale’s science majors go on to pursue graduate work and many have risen to leadership positions in industry, government, and academia.

Ultimately, the true strength of Yale’s science programs lies in the richness of the entire university’s academic and extra-curricular offerings, and in a student’s freedom to investigate these in a supportive and intellectually stimulating environment. 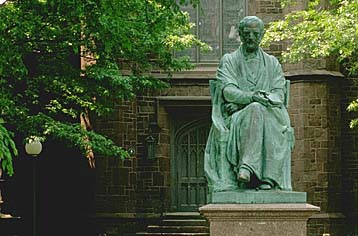