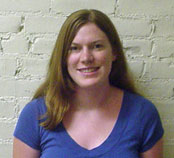 Meredith Frey (Graduate Student) has been selected to receive the 2011 D. Allan Bromley Graduate Fellowship in Physics (described below). Her Ph.D. thesis concerns advanced NMR pulse sequences for novel magnetic resonance imaging of hard and soft solids. In addition, she has a strong record in physics education and outreach, starting as an undergraduate at Wellesley College (where she was a Goldwater Scholar, and the President of the Society of Physics Students), and continuing with Girls’ Science Investigations, Yale Physics Olympics, and Women in Science at Yale.

Meredith is also an NSF Fellow and a Graduate Teaching Fellow for the Yale Graduate Teaching Center. As a GTC fellow, Merideth helped lead the first workshop on the “Fundamentals of Teaching Physics,” to help prepare physics graduate students for their teaching responsibilities. She also served as a Physics Teaching Fellow at the Yale Medical School, preparing under-represented groups for medical studies, and she organized the Graduate Student Seminar to provide a peer forum for graduate students to discuss their current research projects or physics topics of interests.

The Fellowship is awarded annually to graduate students in Physics who have advanced to candidacy in the Ph.D. program, particularly those “who exhibit a broader interest than just physics, including, but not limited to, science and public policy, engineering, and applied science.” Candidates are nominated by the Physics faculty and selected by the D. Allan Bromley Professor of Physics (currently Rick Casten) and the Director of Graduate Studies (currently Paul Tipton). The indenture goes on to say, “In this way, the recipients will reflect and celebrate Dr. Bromley’s distinguished and honorable persona in the exceptional scope, standing, talent, and character of his distinguished personal, public, and academic life.”