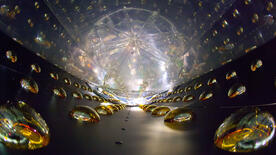 Probing the nature of neutrinos and testing fundamental symmetries is one of the top priorities in experimental nuclear physics. Our nuclear physics experiments include the search for neutrinoless double beta decay, which, if found, could indicate that the neutrino is its own antineutrino; and the direct measurement of the neutrino mass through beta decay. These projects will utilize novel quantum sensors to enhance their experimental sensitivity.

Understanding the origin and phases of matter is a central goal of experiments in relativistic heavy ion physics. The primary goal of our Relativistic Heavy Ion Group’s experiments is to recreate in the laboratory a new state of matter, the quark-gluon plasma (QGP), which is predicted to have existed ten millionths of a second after the Big Bang (origin of the Universe) and may exist in the cores of very dense stars.