Home » About » Sustainability » Past Certifications

We have completed participation in the Office of Sustainability’s Green Workplace Certification. This program is designed to educate and encourage members of the Yale community to adopt sustainable practices in their workplaces. Yale defines sustainability as striking a balance between environmental vitality, human health and well-being, and financial viability. This program is designed to offer action items that reflect that three-way balance, and to inspire members of the Yale community to help us to develop new, creative solutions to sustainability challenges.

The program involves four levels of certification: Y-A-L-E. Workplaces attain each level of certification by accumulating points as they implement action items. A workplace receives full YALE certification once they have accumulated 60 points. (Note: there are over 120 possible points, so there should be ample opportunity for all.)

The chart below shows the final certification level of our four workplaces (SPL, JWG 4th Floor, JWG 5th Floor, and WNSL) which fall under the umbrella of the Physics Department. Please see Green Workplace Certification for more details. 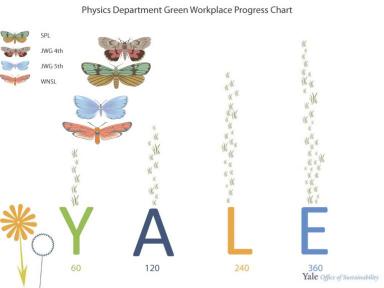 The Green Certification program provides event planners and organizers with a set of practical steps that can be taken to “green” an event. The guidelines make available a set of minimum standards which address the environmental impact of an event in areas such as energy, transportation, waste, materials use, and food. The event is awarded a bronze, silver, gold or platinum rating. Events achieving a gold, silver, or bronze rating will be highlighted on the Office of Sustainability web site. Please see  http://sustainability.yale.edu/green-event-certification for further information.